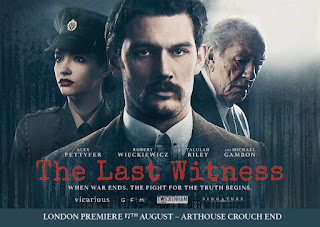 England, 1947. The Fight for the Truth Begins. The Last Witness gets a UK cinema premiere in London next week ...

Directed by BAFTA Award Nominee Piotr Szkopiak, the film's UK Premiere is at the ArtHouse, Crouch End on 17th August. The next day, 18th August, there's a Q & A with the director and Carol Harding, the film's producer, and then it screens exclusively at the ArtHouse until 23th August before coming to Digital and DVD on 27th August thanks to Signature Entertainment.

The Last Witness is a political thriller based on the harrowing true events of the Katyn Massacre in Spring 1940, starring Alex Pettyfer, Michael Gambon and Talulah Riley.

In post-war England, ambitious journalist Stephen Underwood (Alex Pettyfer) comes across a disturbing spate of suicides of Polish soldiers. Sensing a story, his first port of call is Colonel Janusz Pietrowski, a Liaison Officer for the re-settlement of Polish troops under British command. But the meeting with Pietrowski leaves Stephen troubled, and from here his investigation escalates as he finds himself embroiled in a dangerous, multi-layered conspiracy concerning the execution of 22,000 Polish military and civilians by Stalin's secret police.

The Last Witness is the fictional re-telling of a bloody and heartbreaking story by director Piotr Szkopiak, whose mother Emilia Szkopiak, was deported to Siberia by the Soviets in 1940. In 1942 Emilia left the Soviet Union and eventually settled in England in 1947 where she continues to live to this day. Her father, Piotr Szkopiak’s grandfather, Wojciech Stanisław Wójcik, was executed in the Katyn Massacre.

The Last Witness UK Premiere is at the ArtHouse Crouch End 17 August, with a Q&A 18 August and then it screens exclusively at the ArtHouse until 23 August - find out more and book tickets at http://www.arthousecrouchend.co.uk/programme/?programme_id=4737886