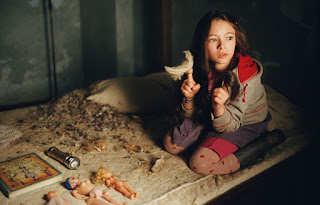 With Terry Gilliam's Tideland getting a new Blu-ray release on Monday, a reminder of Steve Taylor-Bryant's thoughts (with spoilers)...


"Hello I'm Terry Gilliam and I have a confession to make. Many of you are not going to like this film. Many of you, luckily, are going to love it and then there are a lot of you who aren't going to know what to think when the film finishes, but hopefully you'll be thinking. I should explain. This film is seen through the eyes of a child. If it's shocking it's because it's innocent. So I suggest you try and forget everything you've learned as an adult, the things that limit your view of the world, your fears, your prejudices, your preconceptions. Try to rediscover what it was like to be a child, with a sense of wonder, and of innocence, and don't forget to laugh. Remember children are strong. They are resilient. They are designed to survive. When you drop them they tend to bounce. I was 64 years old when I made this film and I think I finally discovered the child within me. It turned out to be a little girl. Thank you. Thank you. Thank you."

Terry Gilliam's introduction at the start of Tideland sort of steals my thunder a bit as this film will have haters and will have admirers and will make either side of the argument one about thinking because, to have an opinion, you have to think and Tideland certainly makes that happen.

Little Jeliza-Rose (Jodelle Ferland) has a very warped childhood. Her parents (Jeff Bridges, Jennifer Tilly) are both drug addicts, and one of her daily chores is to prepare their syringes. After her mother dies of an overdose, her father, Noah, takes her away to his childhood home, but his own mother has passed away and the house is decaying. Then Noah overdoses, and while his body rots in his chair, Jeliza-Rose meets a taxidermist and her unstable brother.

I hadn't seen Tideland before this review, it had somehow passed me by, so the following is based on one watch, written within a couple of hours of the end credits rolling rather than after years of being a fan and multiple watches, as with my other Gilliam articles. So my apologies if this jumps about a bit but I thought it was important to just fire my thoughts on to the page as they arrive in my mind.

The film itself, the story, is one of a child's imagination when she plays but does come across like Alice in Wonderland on crystal meth and, with the stunning cinematography, location, ruined school bus and derelict house, it does leave me wondering how a child could even start to play in such surrounding. Transforming myself into a child to get Jeliza-Rose's point of view was difficult because Jodelle Ferland, who plays her so stunningly, appeared to have all the naivety of youth and I kept remembering I was an adult and felt compelled to try and save this young child. Jeff Bridges was barely coherent throughout the film and yet still impressed with his usual style. Jennifer Tilley played a character that was truly unlikeable, a despicable woman that I'm glad died early on, as I think 90 minutes of her would have made my blood boil, which just shows how supremely talented Tilley is. Janet McTeer as Dell and Brendan Fletcher as Dickens were powerful on screen and, I'll be honest, I still haven't worked out how I actually feel about their performances yet. 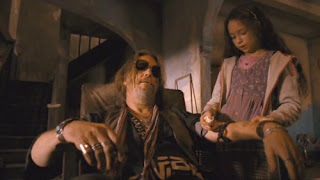 Whilst youthful imagination and fantasy are the crux of the piece there is an almost Hitchcock feel to proceedings and after a while of listening to Sateen Lips, Glitter Gal, Mustique and Baby Blonde (the dolls heads Jeliza-Rose had as friends) I realised Jodelle Ferland's lips had stopped moving and that the heads had become characters in their own right which chilled me to my very core in a way Alfred Hitchcock would have loved.

I can see why people didn't like some parts of the film, they were offended seeing Jeliza-Rose surrounded by drug paraphernalia, cooking up her father's heroin, and with an abusive mother. That can be tough to take sometimes but it is a fact of the life we lead now in this twisted world we call home that children suffer and are surrounded by the mistakes of their parents. Yes, it's shocking to see, yes, it may put a dent in your sensibilities but it really is vitally important we see it as an audience, to see it from the child's point of view as Tideland is filmed, to see how used to the life Jeliza-Rose is and then we may do something about the atrocities that are committed in the name of family everyday. I didn't get to the end of Tideland and feel like I should rebuke Terry Gilliam for what he put on the screen, I got to the end and hugged my children, thought about the times I noticed children living in conditions that weren't ideal and felt sad that I had stood by and done nothing.

Terry Gilliam warned me at the very start that this film would make me think and I haven't stopped thinking since it finished.