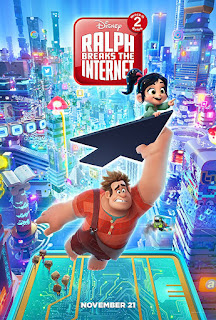 The latest clip from Wreck-It Ralph: Ralph Breaks the Internet is, well, breaking the internet (and it looks nothing like the Oasis in Ready Player One, honest)...

“Ralph Breaks the Internet” leaves Litwak’s video arcade behind, venturing into the uncharted, expansive and thrilling world of the internet—which may or may not survive Ralph’s wrecking. Video game bad guy Ralph (voice of John C. Reilly) and fellow misfit Vanellope von Schweetz (voice of Sarah Silverman) must risk it all by travelling to the world wide web in search of a replacement part to save Vanellope’s video game, Sugar Rush. In way over their heads, Ralph and Vanellope rely on the citizens of the internet—the Netizens—to help navigate their way, including Yesss (voice of Taraji P. Henson), who is the head algorithm and the heart and soul of the trend-making site “BuzzzTube,” and Shank (voice of Gal Gadot), a tough-as-nails driver from a gritty online auto-racing game called Slaughter Race.

Directed by Rich Moore and Phil Johnston, and produced by Clark Spencer, Ralph Breaks the Internet hits cinemas in the UK on 30th November.

Oh, and btw, in case you also need the help with the accent that the other Princesses seem to, our token Scot has let us know that what Merida actually says is pretty much giving away the story of Brave: “I gave my mammy (mother) a cake and she turned into a big bear and then my auld yin (father - a bear hunter) tried to dae (do) her in (i.e. kill her). If that’s no a pure mess, I don’t know what is.” Look at Merida's t-shirt in the clip if you don't believe us.