Doctor Who - The Lodger 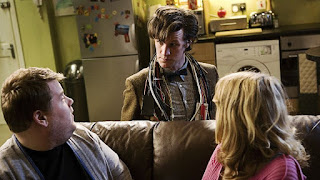 Our Doctor Who expert, Tony Cross, is journeying through all of time and space to bring us his thoughts on every available Doctor Episode. Today is the Eleventh Doctor adventure The Lodger...

Well, I enjoyed that. Doctor Who as sit-com. It's Mork & Mindy redux. Well, the Doc and Craigy but you know what I mean. An alien in a human home. The Doctor trying to be an 'ordinary' bloke whilst changing the lives of almost everyone that encounters him, but especially Craig (James Corden) and Sophie (Daisy Haggard)

James Corden comes in for a lot of flak from chunks of the public but he's rather good in this. Perfect casting in fact. And perhaps the thing I like about this story above all is that Craig's inability to tell Sophie how he feels about her seems quite real to me. I know I've been there myself. [And that's all I'm ever going to say on this subject].

Also, there's the inertia of normal life. The way we get trapped in the cycle of work-sleep-work-sleep and afraid to try and fail. To me this is a story about how the real failure is not to act: Craig can't tell Sophie how he feels because she might reject him; he can't tell his boss his ideas for the workplace because he's 'just a phone drone'.

Perhaps that's why I like this story so much. It's horribly familiar to me as a long-term 'phone-drone' with a share of missed relationship opportunities and a dangerous resemblance to my couch. [This blog is in danger of turning into an episode of Oprah, so I'll stop now before it's too late.]

Sophie's got her own dreams too but her equally unspoken love for Craig is holding her in place. The Doctor manages, in his own inimitable way, to get her to take first steps and as a result almost puts a spanner in the works of true love.

In this case the villain, like several villains in 'New' Doctor Who, isn't evil. It just is. No feelings, no empathy and no understanding of consequences. It's just doing its job. We never - at this point - find out what is behind it or where it comes from. It just is and let us be content with that.

Matt Smith is brilliant in this as he goes into full fish out of water mode. This couldn't have been a Tennant story because Tennant's Doctor would have been able to pull off the ordinary bloke thing too well. It wouldn't have been as funny. Plus, Smith's chemistry with Corden is good enough to make me think they could make a good fist of an actual sitcom together. I particularly enjoyed the fact that the Doctor - or this Doctor anyway - turned out to be good at football. It's not just amusingly un-Doctorish but a nice nod to Matt Smith's own background.

This is a bit of an Amy-lite story as she only pops up occasionally, although she does get a nice little moment at the end of the episode so there's not much to say about Karen Gillan's performance, although I think she is starting to grow on me as an actress. The more she does, the better she gets.

So, in conclusion - as I always used to say when ending my degree level essays with clunking literalism - I loved this story. Doctor Who: The Sitcom. It could work you know. Although I'm aware there's a lot of people out there that have a sniffy view about Doctor Who and comedy, which is a subject I may come back to in another article.

In black and white.