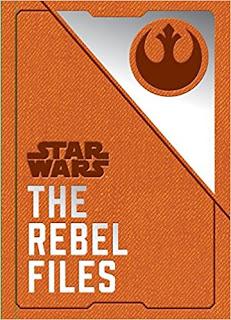 No Bothans died to bring us this information as Kraig Taylor-Bryant read Star Wars: The Rebel Files by Daniel Wallace, thanks to Titan Books (and they don't harm Bothans in the publishing of their books)...

Branded as rebels and traitors, the members of the Alliance worked in the shadows, gathering information and support from across the galaxy to bring an end to the Empire's tyranny. Concealed within a secure case, their most vital and sensitive information was collected by one of Mon Mothma's most trusted aides and kept hidden until now. Discovered by the Resistance in the ruins of an old rebel base, these files have been passed among key members of the Resistance, who have added notes, updates, and new insights to the documents. A repository of Alliance intelligence, The Rebel Files weaves together classified documents, intercepted transmissions, and gathered communications to trace the formation of the Rebel Alliance. Unlock the secrets of the Rebel Alliance.

This is a Star Wars information-based book, that contains digital news report prints, propaganda posters, ship designs, battle plans/preparations, and analysis for both the Rebel Alliance and the Galactic Empire during the events of the original three movies in the Star Wars universe (and one of the standalone films, being Rogue One). The book also contains notes from the perspective of character in the new trilogy who, having read the book, left their own comments on each of the files, to convey their own thoughts on previous events.

The book is divided into four “chrons” or sections, with the first two involving organising the rebellion, which span the time of 14 AFE to 17 AFE (After the Formation of the Empire) which is used for reference to compare with events of the Star Wars films. The first chron of the book includes data on the rebellion chain of command and letters between Alliance leaders entailing identification of new rebel cells, along with news feed reports of rebel extremists who will risk the deaths of innocents to destroy the Empire and reports on actions taken against suspected “rebel traitors” to Imperial rule. The book also establishes major factions within the rebellion, all the ships used and smaller groups that could prove beneficial to the rebellion. There is rebel analysis of enemy vehicles, ships and trooper armour, as well as reports establishing members of the official “rebel council” alongside references to the TV shows and books that span the Star Wars canon.

Chron 2 of the book, consists of analysis of imperial superweapons (as well as rumours and later analysis of the Death Star) and details of characters shown on screen in Rogue One a Star Wars story. These include the overseeing director of the Death Star project, information on the pilot defector and details of the rebel strike team that helped to score the rebellion’s “first major victory”. This section also gives details on the first major rebel base, as seen in Star Wars A New Hope, Yavin IV, alongside its wildlife. The files in this section also have details on future rumoured projects of the Empire, such as operation Cinder and the siege breaker, that are mentioned in other forms of the Star Wars media. We also get to the see the Empire’s cover story for the destruction of the Holy City on Eadu, and further details on what they say caused this. Finally, the section mentions the battle at Scarif, including the ships sent to the battle, alongside plans of the Death Star and smaller details of episode 4, such as the tracking beacon on board the Millennium Falcon.

Alliance chron 3 of the book, mostly contains record of details involving the events of Empire Strikes Back with things like propaganda posters to try to gather further troops, after suffering heavy losses at the battle of Yavin. What's interesting about this segment, is the many details of planning to move their resources to the planet Hoth, and all the information about the wildlife of the planet, potential modifications to make to their speeders, to make them “Snowspeeders”, and blueprints for where every room is planned to be within the base, including the command centre, hangar, and stables for the tauntauns.

Also included in the section, is mention of Imperial probe droids scouting the planet, potential predators of the tauntauns, and tactics used during the battle of Hoth. A report of the aftermath of this battle is also here, with a declaration of the loss of Echo Base on Hoth, alongside and imperial news report stating their success in driving the rebels from their secret base. 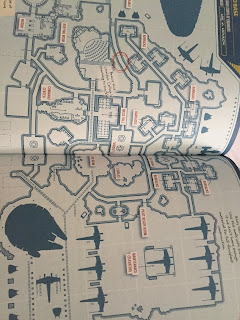 The final chron of the book is focused on planning the major counter attack over Endor, as seen in Star Wars Return of the Jedi. The book also mentions other counter attacks made against the Empire to try and slow down their production of warships, through attacks such as “Operation Ring Breaker” and an attack on planets such as Sollust, to give reference to the mention of this planet in Return of the Jedi. The book also outlines the Alliance’s struggles to reach Endor through the only possible course, an old route through Sollust, as well as containing details on the second Death Star and its power generator, and the sacrifices made to secure this data. This last section also includes the soldiers involved in the attack on and above Endor, with mentions of the leaders for the attack (such as Lando Calrissian, and Leia’s solo operation on Tatooine to rescue Han Solo. The book ends with a final note to the soldiers that are to fight on, and over the planet of Endor.

The Rebel Files is definitely worth a read if you’ve seen the original films, and have questions on how certain events transpired, or what led which characters to do what, because this book does a very good job of outlining the plans for battles and events in the films. It also very cleverly gives us the perspective of the heroes from the Resistance, such as Poe, Vice Admiral Holdo, Princess Leia, Admiral Ackbar and more. What's interesting about the notes made by characters such as Poe Dameron, or Leia Organa, is that they also help to give us a little more backstory for them in Disney’s canon. For example, with the notes made by Poe, we learn a little more about his parents, and their involvement in the rebellion, which I really found interesting. And the letters and notes made by Leia help to give us the idea of how she found out about old rebel bases such as Crait, which is featured in Star Wars The Last Jedi, along with her messages to Mon Mothma, (Leader of the Rebel Alliance, and friend to Leia’s adopted father) which give us the idea about how close Mon Mothma and Leia are.

The book is also really good for reference, for those that haven't seen the Star Wars TV shows, or read certain Star Wars books, but still wish to have some of the gaps in the saga filled, such as what exactly happened before the events of Rogue One and A New Hope that involved the rebellion and the Empire. It covers a variety of these things such as encounters with Saw Gerrera’s “Partisan” rebels, and the “ghost crew” as featured in the Star Wars Rebels animated TV show.

A few of the problems I do have with this book is that a few of the details seem to make re-watching certain films, such as A new Hope, a little less suspenseful. This is just a minor criticism, but the fact that they mention that they had other allies in reserve, in case the Battle of Yavin were to fail, kind of made it seem like the Battle of Yavin wasn’t as big of a win as it seemed to me before I read this. But of course, destroying the first Death Star was still a pretty large feat, so it’s not too much of a problem for me.

Overall, I think this book is definitely worth a read, featuring information on so much of the events between the films and before, adding more depth to the stories we know and love (with some that even I was unfamiliar with!). This makes it a great gift for any fan of the original three films or even the new trilogy and is a great addition to bring both together.