Doctor Who - The Rebel Flesh & The Almost People 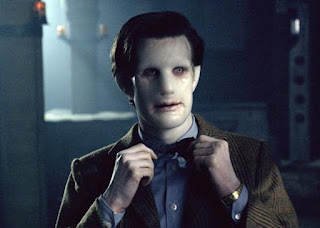 Our Doctor Who expert, Tony Cross, is journeying through all of time and space to bring us his thoughts on every available Doctor Episode. Today is the Eleventh Doctor adventures The Rebel Flesh & The Almost People...

The Rebel Flesh/The Almost People is an interesting little story with a fantastic cliff-hanger leading in to the next episode A Good Man Goes to War. In fact, you might almost argue that this is another new series 3-part story like Utopia/The Sound of Drums/Last of the Time Lords

The TARDIS gets buffeted by a solar storm and The Doctor, Amy & Rory land on a monastery which isn't a monastery. It's an acid mine. Apparently, that's a thing. In the future. Anyway, there operation is carried out by 'Gangers', which are duplicates of their human operators. They are made of 'flesh', which humanity seems to think is just a glorified programmable material. It turns out that there might be a bit more to it than that.

The solar storm hits, fuses blow, systems crash, and it turns out the last set of 'Gangers' have been freed. They're alive. They have the memories of their human operators, but they aren't human. Or are they? The humans are uncomfortable with their duplicates. The Doctor of course tries to help. Unfortunately Cleaves (Raquel Cassidy) ends up killing one of them. (Which reminded me a how Ambrose's killing of Alaya in The Hungry Earth/Cold Blood put the kibosh of the Doctor's attempts to prevent a war between Silurians and humanity) And shenanigans break loose.

It's us or them as both sides say. The rest of the story is part chase through corridors and part a meditation of what it means to be human, including a rather twee set of scenes revolving around Jimmy's (Mark Bonnar) son’s birthday. In fact, as the story goes on humans and gangers die and the difference between the two becomes less and less obvious. There's a thematic similarity to Bladerunner (and a lot of other Philip K Dick material actually): how do we know we are human? What makes us human? Is memory and experience what makes us us? Of course, there's no time to examine these questions in real depth, after all there are corridors to run down and explosions to prevent.

All of these themes though are emphasized by the fact there's a 'Ganger' Doctor, who Amy doesn't entirely trust. The two Doctors work together - in some lovely little scenes - and then separate. Although no one really trusts the ganger Doctor, particularly Amy. But there's things afoot. 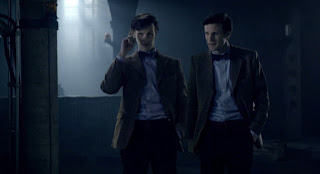 There's a lot of manipulation in this story. The Doctor's very Troughton in Tomb of the Cybermen* in this story. He's up to something. Several somethings possibly and not even his companions can know what that is.

Then there is the manipulation of Rory's good nature. Arthur Darvill's brilliant in this story, as he has been in pretty much every story he's appeared in so far. He's got fantastic comic timing but the ability to handle the more serious stuff too. He's rapidly becoming my favourite new series companion, although it'll probably only take a few seconds of watching Catherine Tate again to knock him off of that perch if I'm honest.

And whilst I'm on the subject of performances I do love Matt Smith here, especially after the two Doctors appear and the final scene - no spoilers here - he manages to convey the alien depth of the Doctor without any kind of ham. It reminded me of David Tennant's 'rage of the Doctor' moment at the end of The Family of Blood in a way. A tale of the Doctor's concern for his companions and the cautiousness of his approach against an unknown enemy. It's rather brilliant, although it does raise some interesting questions, which I may return to later.

I should also add that Karen Gillan does a fine job as Amy throughout the story, when she's required to go through a lot. And the final scene requires her, Arthur Darvill and Matt Smith to be up to snuff to have the impact that it does. I remember watching this at the time and being genuinely gobsmacked even though seeds had been sown throughout the season. We knew something odd was going on, but we weren't quite sure what it was. Well, at the end of this story we know a little more. We just don't know everything.

Actually whilst I'm on a paragraph by paragraph actor review I should say that both Sarah Smart (Jennifer) and Raquel Cassidy (Cleaves) do stonking jobs with their characters. Smart, mainly because her character(s) has more things to respond and react to. Mark Bonnar (Jimmy) is the only one of the male characters that gets a decent amount to do because it is his son around which a lot of the discussion of humanity revolves. Being a Dad is apparently a very human thing. Or perhaps it is just that love is what makes us human. Who knows? Who. Knows?

It's not the most brilliant of stories but it does a fine job of being entertaining and reasonably thought provoking without ever being dull and manages to push the Series 6 arc along effectively. I enjoyed it, but I can't imagine I'll rush to watch it again, unlike say The Doctor's Wife.

*In fact I'd say there's an odd Tomb of the Cyberman vibe about the whole thing but maybe that's just me.