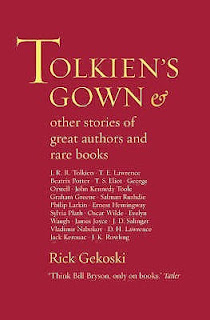 Tony Cross reads a book about other books, Tolkien's Gown & Other Stories of Great Authors and Rare Books by Rick Gekoski ...

Tolkien's gown is an amusing account of how the excited purchaser of some of the great man's effects from his Oxford rooms finds that instead of a rare, unpublished manuscript, or even notes for one, he is in receipt of an old, black, college gown...

Rick Gekoski is a seller of rare books. This book, which has its origins in a Radio 4 series, tells several stories about a number of books, manuscripts (and a cloak) that Gekoski has dealt with. We get to meet famous authors, hear tales of the book's creation and why they have become collectable.

Some of the stories are better than others. I particularly enjoyed those relating to Graham Greene, a writer who I really should read more of as the three novels of his that I have read - Our Man in Havana, Brighton Rock and The End of the Affair - I have liked a lot; J.R.R. Tolkien, James Joyce - that chapter made me want to read Ulysses for the first time - and Nabokov. But there are other stories here too. Only the last chapter, on a manuscript of a Larkin poem that was never published, hits a dud note and that's because it seems slightly out of place in this book.

I love books but I'm not sure book collecting would be for me. It's not a book as an object that I'm drawn to, but the content of the book. Although I'll admit to preferring a real book to a Kindle. But that's perhaps because my collector gene seems attached to Doctor Who and that occupies most of my time.

It's a nice read and Gekoski does a good job of making you want to read some of the books he talks about, which is an achievement. So, enjoyable and interesting I'd quite like to hear the radio series now.