Doctor Who - The Angels Take Manhattan 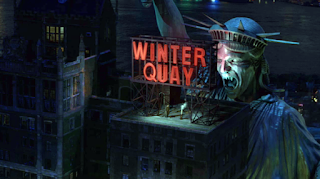 Our Doctor Who expert, Tony Cross, is journeying through all of time and space to bring us his thoughts on every available Doctor Episode. Today is the Eleventh Doctor adventure The Angels Take Manhattan...

Here's a thing. I really don't like The Angels Take Manhattan. There I've said it.

That's not to say there are not moments in it that I don't like or that the end of Rory and Amy's time with the Doctor isn't moving. Indeed, their desire to be together and their paradox creating willingness to sacrifice their lives for each other (and perhaps the world) is the perfect ending of their story. And highlights again why I think Rory and Amy's 'divorce' really doesn't work for me in Asylum of the Daleks.

It looks great too. Cinematic. We're really filming in New York, which makes it feel much more solid. The performances are great. All of that is in its favour.

Because Rory and Amy's departure are so well done I'm willing to overlook the vomitus worship of marriage in this story as if being married somehow makes people better and worthier. Yes, that's probably a harsh reading of the story but how many mentions of 'that's what being married means' do we need. Yes, Mr. Moffat we get it. Marriage is a big deal. Not love itself. No, it needs to have a ring on it.

Now I'm aware here that I'm going to come across as grumpy as hell. I know there are a lot of people out there that love this story. Well, I'm sorry but I don't.

I'm not going to quibble about the Angels being metal as well as stone or the Statue of Liberty (which I did at the time). I've realised now that the implication is that the Angels are now so powerful that they've taken over New York effectively running on the battery farm of human time energy that they've created at Winter Quay - which is a genuinely nasty and rather good idea. So, they can move everywhere and take over anything and the reason no one makes a big deal out of the Statue of Liberty wondering about is that the paradox flattens the battery. The Angels never got to be that powerful. They never took over the Statue of Liberty, which implies that Sam Garner (Rob David) and Grayle (Mike McShane) weren't caught up in the whole thing either.

Oh and I love the baby Angels with their sinister giggle.

Again though this story seems to be the final emotional kicking that the Doctor has been getting through Series 7 so far. Story after story seems to have functioned a clang in a Cloister Bell of alarm for the Doctor and we get lots of talk about not letting the Doctor travel alone: from Amy in the postscript and from River in the final scenes inside the TARDIS.

I've said before with a story that sometimes a single line has the effect of a thread pulled on a jumper that the more you pull at it the more the jumper disappears. This story has one of those lines. It is River's line: "Never let him see the damage. And never, ever let him see you age. He doesn't like endings."

Really. You think after all we've seen of the Doctor this even vaguely rings true. Don't let him see you age? What. Really? That's what you think the Doctor is. Indeed, it echoes a line from The Power of Three where the Doctor talks about enjoying being with Amy and Rory 'fade away', which I'd forgotten about until this moment. It just all seems very un-Doctorish to me. And from the moment that line is uttered the whole story seemed to seem like a beautiful piece of music played on an out of tune piano.

Yes, I'm aware that I have taken against this story purely because it doesn't fit with how I see The Doctor's character. Could a Doctor afraid of endings have left Susan behind? Could a Doctor who can't watch people age really be The Doctor we know? I don't think so.

I feel a bit guilty for not liking this story because I know it means a lot to people. I've really liked Rory and Amy. I love Karen Gillan and Arthur Darvill's performances. I just think something about this story doesn't ring true and I think that's because it is Mr. Moffat putting words into the Doctor's mouth that apply more to him. It's not the Doctor that doesn't like endings it's Mr. Moffat.

I'm also feeling a bit guilty because it seems that this story mattered a lot to Matt Smith, Karen Gillan and Arthur Darvill and that they were emotionally invested in it. I think that shows in the quality of their performances.

But these articles are about my personal reactions to stories and much as there is a lot to like about this story that single River line undermines my whole feelings about it.

It's not a terrible story. It's entertaining and moving. It just feels unfair to the Doctor to me and I really don't like that. It's a personal thing.