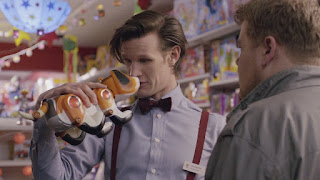 Our Doctor Who expert, Tony Cross, is journeying through all of time and space to bring us his thoughts on every available Doctor Episode. Today is the Eleventh Doctor adventure Closing Time...

Closing Time sees the return of James Corden as Craig Owens and (very briefly) Daisy Haggard as Sophie. Mainly though it is the Doctor and Craig, which is good because James Corden and Matt Smith make an excellent partnership. It's Episode 2 of Doctor Who: The Sit-Com. A series that runs in a parallel universe. If you've got yourself a multi-reality DVD player Series 1 is now available on DVD.

Sorry I don't know what came over me there.

It's another small scale domestic story. Even the Cybermen aren't here in force. It's another story sign posting us towards the Doctor's fate, as outlined in The Impossible Astronaut/Day of the Moon. The Doctor is in a thoughtful mood and seems to have popped by to see Craig as part of a farewell tour. There's a couple of nice little Matt Smith speeches about this, including the one on the sofa with Craig that ends with the most obvious moment possible. In fact, the Doctor seems slightly concerned with how the Earth is going to cope without him. I hope he's not have a Time Lord Tony Blair legacy issues.

It's also another story about love. And love saves the day. Again. This time it isn't Amy and Rory's universe crossing love, it is Craig's love for his son Alfie (aka Stormageddon, Lord of All). If I was going to pick a theme in Series Six it is the power of love: whether that's romantic love: Amy and Rory or the Doctor and River, The Doctor and the TARDIS. Or if it is familial love: Amy and Rory with Melody; Henry and Toby Avery; Jimmy and Adam and Craig and Alfie. Love - of a kind - as the definition of what makes us human and love that can make us change the Universe. And a combination of the two in The Doctor's love for Amy (and Rory). We hear lots of talk about the Third Doctor being a kind of father figure but if there's a Doctor as father figure out there it is The Eleventh. I think we just don't pay as much attention because Matt Smith is so young and there's a lot of flirting going on.

So Series Six: love and family.

Of course I am almost certainly reading far too much into this whole thing: "I love humans. Always seeing patterns in things that aren't there."

Anyway back to Closing Time.

There's a lot of good stuff in here. It certainly has that Doctor Who creepiness and the Cybermen, even though they're small in number, are suitably sinister. Indeed, in a way it is one of the better Cyberman stories, even if they're here to show us the power of love*, which means you couldn't have picked another Doctor Who villain for the story really. So, bonus points for effective use of Cybermen.

It's nice to see Lynda Baron in Doctor Who again, even if it is a reasonably small part. James Corden is good - as he was in The Lodger. There's an anti-Corden vibe out there sometimes but I can't be arsed to buy into that. One dodgy sketch show shouldn't really be held against you and he's never not good in his two Doctor Who appearances so let's not be so judgmental shall we. He says on a blog that is judgmental by its very nature. I think that might be irony.

There's a nice little moment where the Doctor is talking about coincidences and then walks right into a one. It's nice to see Matt Smith is still doing great stuff to but I still prefer the quiet and thoughtful Eleventh Doctor to the manic one.

But enjoyable though it is it does feel a tad inconsequential and like a second string story designed to make the final step to the series finale, particularly as the end of the episode is basically a five minute 'prequel' for The Wedding of River Song.

*Every time I write 'the power of love' I hear it in the voice of Jennifer Rush.