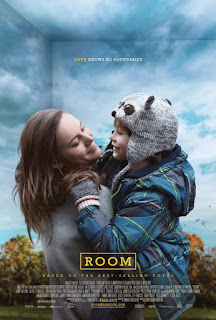 After hearing that Captain Marvel would be coming into the MCU, and would be played by Brie Larson, I didn’t really feel excited or anything. This was probably because I had no familiarity with her previous work. So, to help me understand all the excitement expressed by both my dad, and other fans of her work, I decided to watch one of the films she starred in that she got the highest of praises and awards for, “Room”. This film is based on a true story and revolves around a woman who was kidnapped by a man who tricked her into thinking he had a dog that was sick. This man sexually abused her (as well as physically and emotionally) to produce a child, that was born in the same shed that Brie Larson’s character of Joy, was forced to live in for 7 years.

The film very much gives the theme of holding on to something familiar as well as letting go of something because you have to, through the characters of Joy and Jack, her son. This became apparent to me after Jack continually denies the truth about there being a world outside of the room (really a shed) that they’re held in, showing that he is clearly struggling to let go of the stories his mother told him as he was growing up (stories about there being space outside of the room, and, like he was told when he was little, that there aren’t planets from where each TV programme that he watches come). With his mother however, we see the complete opposite, she may be holding onto her memories of the outside world when she’s living in the room, however, when they manage to make it out of the room, she is constantly trying to let go, and make her child forget about everything that he believed or loved whilst he was in there. There are some moments when Jack’s struggle to let go was clear, such as in the moments when he yells at his mum because she’s trying to tell him that all the things she told him before about the magic Tv being what brings Old Nick to them, with the gifts or food for the week, was all a lie.

This idea of holding on and letting go is also present through Joy’s father when she escapes the room, as he shows himself to be very cold towards Jack, which I assume is because Jack’s father is the one that sexually abused his daughter. This makes me think that he’s struggling to let go of what’s happened to his daughter in a way that he sees Jack as a reminder of what happened, and, like the whole ordeal that Joy and Jack eventually try to forget, he wants to forget about Jack so that he can forget about what happened. Maybe I’m digging to deep into this but this is very much present in other real-life scenarios when a woman is sexually abused and produces a child that looks like the abuser, which would remind the woman constantly of what happened. This is kind of what’s happening with Joy’s father, and this story about Joy and Jack spreads awareness of these sorts of events as well as abduction, making “Room” a very special and important film that I think everyone should watch at some stage of their lives. 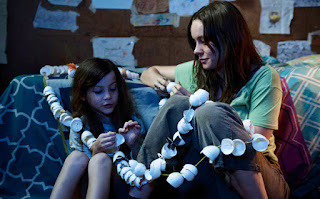 Some of the very special aspects of this film that help to accompany the emotion of Joy and Jack, is the music and editing. The music very much gives us the feeling of the innocence and Jack’s youth in those moments such as when he’s running around in the room to help him exercise, and that is fun for him. It’s music like this that’s both happy and sad at the same time. Accompanied by the slow editing, it helps to remind us that this is his idea of having fun, and it makes us feel sorry for him because he doesn’t get the same freedom, and enjoyment that we all had at his age, making it the kind of story that should also encourage children to go out more and enjoy their own freedoms, that Jack was denied. The music also manages to make us feel happiness for him because he’s so happy, it helps us connect with him because we can relate to when we were his age, which is what makes us upset when we realise that this is his very limited concept fun, and he doesn’t know what its like to live any other kind of life, or experience any other kind of fun. The music used also seems to be combined with a more sombre tone towards the end which very cleverly gives us thoughts of letting go that Joy and Jack must have experienced, after revisiting the room they were kept in, and makes us think not only back at how horrible life was when they lived there, but also a hopeful belief that they had a better life from that point onward. That’s what, for me, makes the music so powerful, and it surprised me greatly when I discovered that a music award wasn’t among the many that this film both received and deserved.

On the flip side it’s the lack of sound combined with the slow editing that makes other moments more dramatic and upsetting. Such as when Jack is jumping out of the kidnapper “Old Nick’s” pick up truck to try and escape, after he thinks Jack is dead. In the moment when Nick is chasing Jack, everything seems to slow down, and the lack of sound following the sounds hopeful build whilst he is in the truck is cut out to build suspense, and amplify the heavy breathing of Jack, as well as the sounds of him falling over. The fact that during this it keeps cutting between Nick and Jack makes it more intense because it helps to make us believe that Nick is getting closer and is going to catch Jack, and helps to keep us thinking that they are both moving fast, but the film wants to give us time to process it all and feel tense during the chase but prolonging it. These reasons for me are enough to make me believe that both the sound editing and the music were a vital piece to capturing Jack and Joy’s emotions when this happened in real life, making me believe that this aspect of the film was certainly worth another award.

In terms of the acting, I believed it to be near flawless, with the incredible performance of Brie Larson portraying a woman who is damaged and yet hopeful, that she will eventually find a way out of the shed, or the “room” as Jack calls it. There are moments in particular where she really shines though, like when she manages to survive the ordeal of being kidnapped and makes it out. She makes us believe to be Joy in the scenes where she’s lashing out at her mother because she doesn’t know what she is feeling, or in those scenes in the room where Joy feels tired and frustrated, and yet, still hopeful that she can find a way out.. Other impressive performances though, include the young actor who played Jack, Jacob Tremblay, a boy who grows up in this room, without knowing about the world or much about anything that resides outside of the room. He also shone in moments such as when he’s getting frustrated with his mum when she tells him that she was lying about what she told him about the outside world being space, and about magic bringing them their food and treats for the week.

I also found this film to be very good at, showing all the dimensions of every person during the events, the film is made to show us everything that happened when these events occurred, including the moments when the kidnapper shows his kindness towards the child whilst also showing Joy lash out at him for touching Jack. It was in this moment that you see Nick as a sickly kidnapper, but still a person that sees Jack as his child. Of course, we as an audience are afraid of him in moments like this, because we fear for the idea of him hurting his child in the same way, but it shows that there are varying degrees of a monster such as him, much as there is for any criminal. And Brie Larson again manages to prove her skill and potential in acting in the moments when she is acting playful to keep her child happy, or on other days where she is simply feeling depressed or angry.

After watching this film, it became clear to me why they chose Brie Larson for the role of Captain Marvel as she has shown clear potential as an actress. It was because of these excellent performances that you could believe yourself to be a witness of this tragic story, and that’s what led me to cry in the most powerful moments in the film, because, like my dad warned me, if you have any kind of emotion inside you, this film will upset you.