Doctor Who - Dinosaurs on a Spaceship 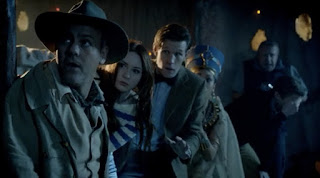 Our Doctor Who expert, Tony Cross, is journeying through all of time and space to bring us his thoughts on every available Doctor Episode. Today is the Eleventh Doctor adventure Dinosaurs on a Spaceship...

I like most things about Dinosaurs on A Spaceship. I think because it feels like an old school Doctor Who one-off adventure unburdened by the weight of story arcs, although I don't think it stops people looking for hints. After all The Moff's era of Doctor Who often sows little seeds throughout adventures that pay off. Eventually. Hopefully.

Having said that there is a darkness at the heart of this story that it is easy to overlook: the mass murder of Silurians by Solomon (David Bradley); Solomon's rather disgusting little speech about 'breaking' Nefertiti (Riann Steele) and - perhaps the most controversial moment in the story - the Doctor's decision to kill Solomon. There's no way around that fact. He doesn't let him die. He kills him.

People seem to think this is un-Doctorish but I'm not so sure it is. I think we've started to see the Doctor as far too saintly than his history would indicate. The universe is scattered with the bodies of people or creatures that the Doctor has caused to be killed. He doesn't often directly kill I'll accept that but, for me, I've never seen the Doctor as angelic. To me - as I've said in previous blogs - he's the sort of angel that gets referred to in one of my favourite speeches in Prophecy: "...always with one wing dipped in blood. Would you ever want to see an angel.”? One day I may write a blog at length about 'Death and The Doctor' but he's ruthless when it comes to it, particularly if he's given you a warning. After all Solomon is a mass murderer.

Yes, it might be a little surprising for new Doctor Who and for The Moff's era but that's partly because Solomon is an unusually black and white villain for the Moff's era of the show (even though I'm aware the story was written by Chris Chibnall). An out and out bad guy with - apparently - no redeeming features. However surprising though it is I don't think the Doctor is a character without blood on his hands. The fact that the Doctor knows this is part of the weight he carries.

I did think at the time that perhaps there was going to be a thread in the season that showed that the Doctor had been slightly affected by the Dalek Nano-cloud - see Asylum of the Daleks - but I'm not sure if I'm right about this. We shall see.

My other issue with the story is the 'comedy' sexism and unnecessary macho flirting of Riddell (Rupert Graves), although I'm inclined to think this is deliberately done for two reasons: firstly to show how wonderful both Nefertiti and Amy are and secondly to allow Amy to comment on the flirting between Riddell and Nefertiti as an ironic commentary on the flirting that goes on so much in New Doctor Who. (Phew, that's an oddly unlovely sentence.) I should add that I like both Rupert Graves' and Riann Steele's performances. They're nicely pitched.

Even allowing for that though do we have to start with another powerful woman grappling with the Doctor. It always seems a bit of wishful thinking on behalf of various Doctor Who writers to me. It's like after years of jokes about Doctor Who fans being single/living with their mother the (male) writers of Doctor Who have turned the Doctor into a symbolic representation of Doctor Who fans. It's a kind of mass Mary Sue-ing. Or something similar.

Anyway enough of this taking all this stuff seriously I should stop briefly to give a small round of applause to Mark Williams who plays Brian, err, Williams aka Rory's Dad. It's a lovely understated and perfectly timed performance. I'd like to see more of Brian.

Actually I've written this as if I didn't really like it, but I really enjoyed it. It's well-acted, even if some bits and bobs of the script irritate me and it feels like fun, which is the first story that's felt like that for a while. Sometimes this self-imposed 'watch all Doctor Who in order' plan feels like a chore but often a story pops up that is just good fun. This is one of those stories and one I'd happily watch again.