Doctor Who - A Town Called Mercy 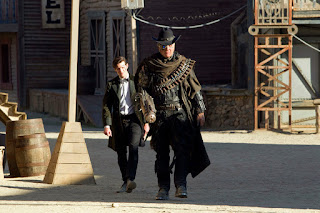 Our Doctor Who expert, Tony Cross, is journeying through all of time and space to bring us his thoughts on every available Doctor Episode. Today is the Eleventh Doctor adventure A Town Called Mercy...

I really enjoyed A Town Called Mercy. I think more than I did on original watch. I think that's partly because I have been indulging in regular trips into the Western genre as part of my little project revolving around The Gunfighters and partly because it is nice to have another adventure that fits into the rather more old school Doctor Who pattern of just turning up and getting involved without dragging the baggage of a portentous story arc, although I think we are starting to see that the Pond's involvement with the Doctor is becoming more problematic. This I suspect will form part of our ongoing Series 7 stories.

The first thing I should say is that it looks fantastic. It helps that the production team went to Almeria in Spain to film it. Those of you familiar with Westerns will know that this is where several films, including A Fistful of Dollars were made. It doesn't look like a set or a beach in Wales it looks like the Wild Wild West.

Add to that a fantastic performance by Ben Browder as Isaac the Marshall, which really helps cement the genuine American feeling of this story.

For a chunk of this story Isaac is more The Doctor than the actual Doctor. The Doctor gets genuinely angry in this story at Kahler-Jex's actions as a surgeon. Angry to the point of appointing himself judge, jury and - not quite - executioner. I wondered at the time whether this was the result of the Dalek Nano cloud as mentioned in Asylum of the Daleks, but I noticed on this watch that Amy says to the Doctor that he's behaving like this because he's been travelling on his own again. A regular thread of New Doctor Who is that the Doctor needs companions to keep him 'human'. Left to his own devices he starts slipping into a Gallifreyan fugue, which leads him to start behaving like the Time Lord Victorious than The Doctor.

I do feel though that this is another story designed to make the Doctor feel bad about his lifestyle. After all you could blame the Doctor for Isaac's death so there's another death for him to take responsibility for. If you want to be horrible about it.

Then there's Khaler-Jex's discussions with the Doctor. The first of which effectively pushes all the Doctor's buttons and makes him angry enough to throw Khaler-Jex to the Gunslinger. The second, about the weight that Khaler-Jex will carry with him after his death, also seems designed to make the Doctor introspective. There are a number of quotes designed to echo the Doctor's own issues: "War is another world. You cannot apply the politics of peace to what I did. To what any of us did." But more importantly perhaps is the Doctor's quote at the end of another long discussion with Kahler-Jex: "You don't get to decide when and how your debt is paid". Add to that the reference to both men as 'Alien Doctors" and Khaler-Jex introducing himself as just 'The Doctor' and you can't avoid thinking this is another in a long line of stories designed to make the Doctor re-evaluate his lifestyle.

I should add here that all of these Doctor-Khaler-Jex conversations work very effectively, particularly because Adrian Scarborough does such an excellent job with the part. In some ways Khaler-Jex is a Doctor Who staple: the scientist who thinks the end justifies the means. An echo of Davros - another scientist seeking to create a victory weapon to win a long war - if you ask me, which I'm sure you won't be.

But in the end he's more than that. He's one of the few that has realized that the price they paid for their victory might not be one worth paying.

What of the Gunslinger itself. It's effectively clunky. A Doctor Who-esque take on the Terminator. A few steps away from being a Cyberman. In a way though with all its rules it is probably not horrible enough to be utterly terrifying, but that's nice. It's a small-scale story to some degree. It's one man's attempt to find revenge. In that sense it feels a bit like Doctor Who's take not just on High Noon but echoes the themes of a trio of Clint Eastwood's Hang 'Em High, High Plains Drifter and Pale Rider. The final acts of a far larger and darker story of a nasty war on a distant world of which we know very little.

Talking of themes that I notice that we get a reference to motherhood again when Kahler-Jex says to Amy: "You're a mother, aren't you...There's kindness in your eyes. And sadness, but ferocity too." I'm not sure what we are to make of this but the continuing thread of family seems to me to be important but I'm probably utterly wrong.

I haven't said much about the three regulars because Smith, Gillan and Darvill's performances never seem to drop to much these days but a polite round of applause for the face-off between The Doctor and Amy, which is played rather nicely by Smith and Gillan, with a nice little line from Ben Browder in there too.

Really enjoyed it. Probably thought to much about it now.