Doctor Who - The Girl Who Waited 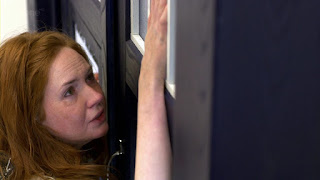 Our Doctor Who expert, Tony Cross, is journeying through all of time and space to bring us his thoughts on every available Doctor Episode. Today is the Eleventh Doctor adventure The Girl Who Waited...

There was a point whilst I was watching The Girl Who Waited when I began to think, 'Hang on Amy. Rory waited 2,000 years for you. And you've become bitter and twisted in 36. This doesn't seem fair." But then you realise that Rory didn't get old during that time and effectively it all got re-written so maybe he didn't really wait 2,000 years after all but then I remembered that Rory had died for Amy. Several times. But then they weren't really deaths. Then I realised that all this chasing my own mental tail was doing no one any good and I should just buckle down and get on with watching the bloody thing.

I love writer Tom MacRae's central ideas: the two time streams, the kindness at the heart of it all and the McGuffin plague designed to keep the Doctor tramped in the TARDIS whilst Rory and Amy get to be the heart of the story.

I suppose though this story stands and falls by how much you care about Amy and Rory. I'm not a big fan of this 'love that can cross time stuff' and I consider myself something of a sucker when it comes to things romantic. I think Amy and Rory are lovely but the Universe's great love affair? Oh, call me a cynic and send me off to La Ville de Cynic.

Having said that I did shed a little tear - which Louise Mensch will undoubtedly judge me as unmanly for - during the final scenes. Rory's Choice, as this story might have been called, was heartbreakingly and brilliantly played by both Karen Gillan and Arthur Darvill, although allowing Amy 1 (or is Amy 2) to make the decision herself felt a tiny bit like a cop out.

Normally I praise Arthur Darvill and am less effusive about Karen Gillan's acting. Not because I don't think she can act but because Arthur Darvill is so good. And he's good in this too but this story is so dependent on the excellence of Karen Gillan's performance(s) that she deserves much praise. She's brilliant. The lovely scene, which must be bloody hard to do, where the two Amy's talk is pitch perfect. And, of course, the final moments of the episode.

The Doctor gets a bit of an emotional battering here. Lots of rudeness from both Rory and Amy plus the moment when Rory says (if I can get the words right), "You're trying to make me into you." That line - and an earlier one from Amy about 'romps' - points out the darkness at the heart of the Doctor's adventures. The Doctor constantly must make these tough decisions and we now know, because the Doctor told us himself, that the Doctor lies. And he lies here. And then when Rory asks him a direct question he avoids answering it. The price the Doctor pays for his 'romps' is made obvious here.

And credit to Matt Smith for some fantastic work too. In fact, considering there are only three main actors in this there isn't a duff performance out of the lot. Indeed, if there had been the story would have died on its arse. Great ideas though it has at its core none of that would have mattered if Matt Smith, Karen Gillan and Arthur Darvill hadn't been so good.

So despite all my doubts and cynicism, all my quibbling I must admit that it is bloody good. It's amazing how writing all this down can focus the mind.