Doctor Who - The God Complex 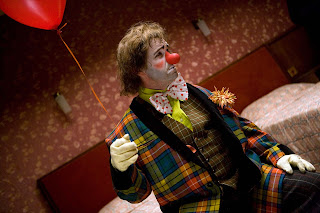 Our Doctor Who expert, Tony Cross, is journeying through all of time and space to bring us his thoughts on every available Doctor Episode. Today is the Eleventh Doctor adventure The God Complex...

The God Complex is an odd one. When I watched it first time around I really enjoyed it. An interesting script by Toby Whithouse and directed with panache by Nick Hurran. Even if there's an obvious debt to The Shining. This time around though I wasn't so sure.

It's certainly atmospheric. The idea that there's a place out there where each room is filled with the things that we are most terrified by, including the saddest looking clown I have ever seen, is a fascinating one. It's no wonder the Doctor gets the wrong idea about what the solution to the problem is. In fact, he probably makes things worse.

If anything this story is designed to bring home to the Doctor the dangers he is putting Rory and Amy through. Although he seems slightly more worried about Amy than Rory. Amy seems to need the Doctor in a way that Rory doesn't. Rory's brief conversation about victories is rather lovely, even if it only takes a couple of lines.

However the one after another deaths of Joe (Daniel Pirrie), Howie (Dimitri Leonidas) and Rita (Amara Kahn) and another narrow escape for Amy hammers home to the Doctor the risks of his lifestyle for other people. Particularly Rita's death. The Doctor takes a shine to Rita from the off because she's bright. She's even offered the possibility of travelling in the TARDIS. But she's doomed. As Rory says, "Every time the Doctor gets pally with someone, I have this overwhelming urge to notify their next of kin."

Indeed this story might purely have been designed to make the Doctor feel bad. Rita accuses him of having a God complex, he must pop Amy's faith in him (a scene with echoes of The Seventh Doctor's conversation with Ace in The Curse of Fenric. The Seventh Doctor used brute, cold emotional force whilst The Eleventh is much more sweet and gentle) and then the dying - but nameless creature - hammers home the point. It's no wonder at the end of this Doctor feels the need to drop Amy and Rory back on Earth again to save them. I've never felt sorrier for the Doctor than at the end of this story, which I'm pretty sure is the point. After all we know the Doctor knows he's going to die and The Creature's comments remind us of this. (And it's a nice little scene.)

There's a lot of good stuff in here in terms of performances from both regulars and guest actors. Special kudos to Amara Kahn's Rita, whose pre-death chat with the Doctor is particularly brilliant. I should also add that David Walliams does a nice job as Gibbis, whose rodent like race specialize in being invaded and oppressed without being butchered. There's a nice scene between him and the Doctor where the Doctor is rather scathing of Gibbis's cowardice, calling it sly.

A bonus point to Toby Whithouse for a mention of the Nimon. How many Nimon have you seen today?

So, after all that what did I think of the story. The atmosphere, direction and performances are all rather good, but I feel bizarrely less impressed than I was the first time around. Perhaps I'm tired. Perhaps I'm not in the right frame of mind. There's nothing I can put into coherent words, which probably makes this blog a bit pointless, so I apologize for that. I'll try and do better next time.

I would say though that I think this is the sort of story that might benefit from re-watching. There's layers here and things that I suspect I've missed. And perhaps, one day, we will discover what the Doctor saw in his room. One day.