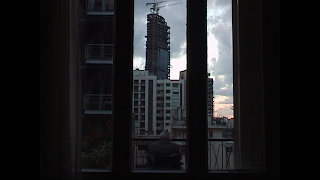 The Festival Awards this year were:

"This palpably dangerous film is an unforgettable experience. It reflects a combination of the filmmaker’s capacity to be present, intuitive and to fully utilise the digital camera – revealing a new form of observational filmmaking as both durational and dramatic. It captures the disturbing carnivalesque of military operations – and the undecidable nature of the filmmaker’s role in this, where her camera is both witness and weapon/shield."

Honourable mention to The Swing by Cyril Aris for its "impeccable judged framing and profoundly touching meditation on mortality and morality."

The Open City Award is awarded to the film that exemplifies an author in control of their subject matter, craft and story - matching content and form in a powerful and persuasive fashion. The jury is chaired by Sophie Fiennes, alongside Beatrice Gibson, Nelly Ben Hayoun, May Adadol Ingawanij and Mehelli Modi.

"Woven together with an unusual master of craft, this film is a remarkable intergenerational dialogue between father and daughter that ties together strands of history, place, loss, justice and memory. It is a brave exploration of the past that also shines a light on the present. "

The Emerging International Filmmaker Award is presented to a first or second time feature filmmaker who displays new and exciting approaches to storytelling, and who exhibits commitment to their choices and a clear directorial vision. This year’s jury includes: Tessa Boerman (Chair), Luciano Barisone, Cecile Emeke, Chiara Marañón and Tadhg O’Sullivan.

"The Best UK Short Award goes to The Mess for its visceral and empathetic portrayal of mental illness. The jury was impressed by its creative and collaborative approach to making an otherwise mental state visible."

The Best UK Short Award recognises the film that demonstrates the most engaging, innovative and compelling approach to short-form documentary. A film that would best represent UK talent at an international level and that demonstrates promise for the filmmaker’s future career. The jury features: Stephanie Spray (Chair), Laure Bonville, Amar Ediriwira, Julia Nottingham and Lynn Nwokorie.

Image - 90 year old Antoine sits on the balcony of his Lebanon home in Cyril Aris’ The Swing (2018), the festival’s Closing Night film.

Find out more about the festival
Email ThisBlogThis!Share to TwitterShare to Facebook