Doctor Who - The Wedding of River Song 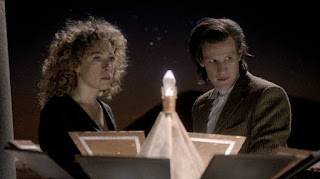 Our Doctor Who expert, Tony Cross, is journeying through all of time and space to bring us his thoughts on every available Doctor Episode. Today is the Eleventh Doctor adventure The Wedding of River Song...

So, Series Six comes to an end with The Wedding of River Song. Most of the threads left lying throughout the rest of the series are twisted together so that we can finally see how the Doctor escapes his fixed point in time death in Utah. Unless this is the final episode of Doctor Who ever. Except obviously it isn't. So, he's clearly got to escape.

Initially we think it is River's refusal to actual kill the Doctor that saves him. Except her decision to not go through with it causes time to collapse. Everything is happening on Earth at the same time. There are Romans waiting at traffic lights, steam trains running through the Gherkin (for reasons I'm unsure of) and Churchill - who is the Holy Roman Emperor natch - knows about downloads. The Doctor needs to die. Then you start to think that Amy and River have come up with a cunning plan to save him but in the end the Doctor saves himself. He's been thinking ahead. Hurrah.

Of course the Doctor doesn't die. I had theories about the Flesh Doctor being the get out - and I'm sure a line was thrown into The Almost People as a deliberate Red Herring (although I could be wrong) - but in the end the Doctor comes up with another solution.

It's nicely written. I like the fact that the first part of the story is made up of the Doctor trying to avoid his fate and investigating why the Silence want him dead. It's only when the Doctor is told of the Brigadier's death (in a short but rather sweet little tribute to Nicholas Courtney) makes him realize that time is catching up with him.

This is all done rather nicely through flashbacks as the Doctor tries to explain what is happening to Churchill. It's when we realize that the Silence are here already that things slip into the 'present'. It's all rather timey-wimey.

Fast forward to the end via the re-introduction of Amy, Rory and River plus Madam Kovarian and the Silence.

The re-introduction of Amy is nicely done, a little misdirection here and a nice little bit in the train between her and the Doctor.

Then there's some fun in a pyramid. A battle. Amy does something rather unpleasant to Madam Kovarian. It's a rather good moment. It would almost seem uncharacteristic of Amy if she wasn't given a couple of sentences which nicely explains her quiet anger. I quite like it. It seems a real response to an impossible situation. Rory gets to show his courage and general Roryness.

Then River Song gets to explain their plan to which the Doctor's response is rather short and cold. Then River Song gets married. And everything is re-set. The Doctor dies. Then we get a coda explaining how he doesn't. Or didn't. The Doctor's taking a step back out of the limelight. He's got too big. The combination of the shocks he's gone through since A Good Man Goes to War have led to this moment. Perhaps he's hoping his apparent death will hold off his final moments on Trenzelore.

So with all this explanation of the plot I'm clearly avoiding talking about what I think of the episode. It's a delaying tactic because whilst it's all very clever and exiting I found myself feeling a bit unbothered by the end of it. It's all clever-clever. It's well-acted and the actual wedding moment is nicely done but it feels unusually lacking an emotional centre. For me.

Perhaps that's just me. After a run of stories about love and sacrifice this one just feels a bit like it is missing something at its centre. Is it because this is the first of those stories where intellectual overwhelms the emotional. There's so many threads to tie up, so much to deal with and so many questions to be answered that the heart of the story seems to be missing.

Who knew I'd ever criticize a new Doctor Who story for lacking emotional oomph, but it just never clicked for me. It does the job of wrapping up the season though whilst leaving us one or two unanswered questions to take us through to the end of the Eleventh Doctor's era.

So I like it quite a lot even with my concerns. Good, but no cigar. As Churchill never said.