Doctor Who - The Doctor, the Widow and the Wardrobe 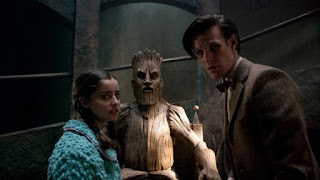 Our Doctor Who expert, Tony Cross, is journeying through all of time and space to bring us his thoughts on every available Doctor Episode. Today is the Eleventh Doctor adventure The Doctor, The Widow and the Wardrobe...

I loathed The Doctor, The Widow and the Wardrobe the first time I watched it. To the point of actually 'for Heffalumps saking' at the television. Watching it for the second time I'm not quite sure what drew my ire. Yes, it's not particularly great. In fact, it's probably the worst of the Christmas specials but it isn't quite as diabolical as I remembered.

Obviously the problem with Doctor Who Christmas Specials is that the fromage factor is pushed to an almost vomitus degree. If you've got an allergy to dairy products then I'd steer clear of this.

It starts off with a sequence aboard a spaceship that involves lots of CGI, some serious explosions and possibly the most improbably ridiculous survival having unwillingly exited a spaceship since the Heart of Gold happened to pick up Arthur Dent and Ford Prefect. At least that escape had a vaguely sensible science-fiction explanation. The Doctor's escape is just ridiculous. Utterly ridiculous. And badly realized too.

Now, I'm aware that this kind of quibbling when the whole premise of the television series I'm watching is utterly ridiculous too, but this is my article and my rules.

We then meet Madge Arwell (Claire Skinner) who is the hero of this tale. The Doctor is here mostly in a comedic, trouble causing capacity (with a couple of exceptions). It's just before the outbreak of World War Two. She finds the Doctor - trapped in a spacesuit - and eventually returns him to his TARDIS via an 'amusing' sequence about her bad driving, which we'll get a call back to much later in the script. We also get to meet the whole family. Husband Reg (Alexander Armstrong), daughter Lily (Holly Earl) and son - and prototype geek - Cyril (Maurice Cole).

Skip on and Reg is flying his damaged Lancaster back home, but he's lost and it's not looking good. Then we're back with Madge and she's got the dreaded telegram.* It's Christmas though and she doesn't want her children to link Christmas to their father's death, so she hasn't quite got around to telling them. They're heading off to Madge's Uncle's huge country house for Christmas where the Doctor has already got there.

There's several minutes of Matt Smith being an over-caffeinated Doctor as he shows everyone around the house, which he's been busy doing up. I particularly like the Lemonade tap btw. If the Doctor can arrange a beer one for me that'd be great. But I digress.

To cut a long story short the Doctor's tried to arrange a surprise using a portal to a planet that is basically 'Planet of the Christmas Trees' and - as often happens with the Doctor's plans - it all goes horribly wrong. And the Doctor, Madge, Cyril and Lily get caught in the crossfire of the evacuation of the 'lifeforce/souls' of the Forest and an acid rain tree destroying forest destruction plan involving the people of Androzani Major. Apparently, the trees of Androzani Major are the greatest fuel in the universe of some such hyperbole. They couldn't just be 'fuel'. They must be the GREATEST FUEL IN THE UNIVERSE. Never knowingly small scale the Doctor Who Christmas Specials.

Except there is at the centre of all this BIG stuff a small-scale story about families. Once more love is at the core of a Moff era Doctor Who story. This time it is the love of a mother - which is a thread that I suspect we won't see the last of. There's a couple of key lines about the power of women. It's almost as if The Moff wanted to show that accusations of sexism in his writing were ridiculous. So, men are 'weak’, and women are 'strong'. And Madge ends up being figuratively and literally the Mothership. All very metaphorical.

Phew. There's not much wrong with the performances - although I think in this story they're really pushing Matt Smith to be overly flappy. It's all mildly entertaining but once more the best moments are when Matt Smith's quiet and still. The little speech to Madge about why she's shouting at the children is lovely writing and brilliantly acted.

Holly Earl and Maurice Cole are good. Child actors can be a bit annoying, but both avoid that, which is rather good. Although Holly Earl would have been about 18 when she played Lily so calling her a child actor is a bit unfair. Claire Skinner is also good as Madge, especially in the crying confrontation with the three employees from Androzani Major. Alexander Armstrong does what needs to be done in a part that doesn't have much too it beyond stolid British bloke.

I talked in the Let's Kill Hitler article about glibness when it comes to Nazi's in that story and actually how Doctor Who isn't really the place to have a realistic portrayal of them and there's an echo here in the way we see Reg's rescue. We've established that one of his crew is badly hurt and yet once the plane has landed it's all about the family Arwell. The rest of the plane's crew are forgotten and for some reason that bloody annoys me. I find myself thinking that Doctor Who writers should stop using World War Two as shorthand. I dread that one of these days The Moff will decided to homage A Matter of Life and Death. At that point I might throw a brick through my television screen.

I know Christmas specials have attracted a patina of extra cheesiness, generally but this one goes too far. It's like swimming in a sea of melting cheese. The Doctor Who equivalent of fondue.

*Actually I think one of the reasons the World War Two stuff annoys me is that I know my Grandma got one of those 'Missing Presumed Dead' telegrams. She was lucky, and they eventually found my Grandad badly wounded and in hospital in Wolverhampton. This might not have skewed my reaction to the story, but I propose it as a possibility.