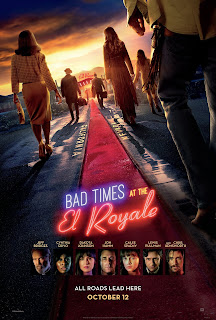 Discover some of the Bad Times at the El Royale hotel in a new behind the scenes featurette...

Seven strangers, each with a secret to bury, meet at Lake Tahoe's El Royale, a rundown hotel with a dark past. Over the course of one fateful night, everyone will have a last shot at redemption... before everything goes to hell.

Written and directed by Drew Goddard (the pen behind The Martian, Cloverfield, Cabin in the Woods and World War Z among many others) and starring Jeff Bridges, Cynthia Erivo, Dakota Johnson, Jon Hamm, Cailee Spaeny, Lewis Pullman, Nick Offerman and Chris Hemsworth, the El Royale opens for business on 12th October.