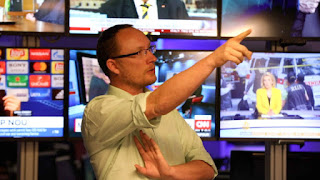 I love anything based on journalism. Complete fiction like Sidney Lumet’s Network, real life stories like those in the guise of All the President’s Men, and any documentary I can get my hands on. Mix in some politics, my favourite subject, and you’d be hard pressed to make something I don’t enjoy.

Breaking News is a Czech documentary from Tomáš Bojar and takes place in two media companies on one day. The Czech President, Miloš Zeman, has invited around 900 friends and supporters to Prague Castle. Its March 9th, 2017 and he is going to allow his captive audience to be the first to know whether he is going to seek re-election or not. On most days this would be exciting news in any country and you would have wall to wall coverage and the whole speech transmitted live on multiple channels with the print media using their online fanbase to get the news out whilst the team of writers and editors build the hard copy for the following morning. The difference this time is that Zemen has decreed that no press is allowed access to the castle. There are no cameras or reporters to be inside the building. So, how do you go about breaking the news when you don’t have access to it?

Breaking news is wonderfully shot and has cameras in the bustling expanse of the paper, Hospodářské Noviny (Economic Newspaper is the translation as far as I can tell) as the all the staff and editors and sub-editors prepare for every eventuality. Mock ups of various pages depending on Zemen’s decision are painstakingly worked on and seeing how the modern-day print media work is quite the eye opener. Often in this era of click-bait its hard to remember that there is hard working ladies and gentlemen of the press that want to get the story right and to see these guys in action is a nice reminder of a time gone by almost. The other company that Bojar has access with his cameras to is Českά Televize, or Czech Television, which is a fast-moving operation. They eventually manage to get someone inside the castle to film the speech on a mobile phone and transmit the footage, as grainy and as poor as it is, with reporters in the hellish rain outside the castle to react to the decision and a team in the studio to bring the speech to a watching nation.

Many scenes in Breaking News are reminiscent of The Newsroom, the brilliant Aaron Sorkin show you all know I love but, with this being real life, it is quite tense to watch. Despite the language not even breaking my top ten of languages I know at least one word in, I found that the actions and anxieties I saw on the screen came across in an almost universal way and the subtitles were large enough and fast enough for me to always know roughly what was going on. A Czech documentary may not be top of anyone’s list to watch, and I know that subtitles put a lot of people off watching things like this, but I have yet to find an English-speaking documentary that delivers everything that Breaking News does in such style with such unparalleled access. If you get the chance to cast your eye on Breaking News I implore you to do so, its wonderfully educational and gives a you a much-needed renewed respect for journalists in an era when its desperately needed. Spoiler - Miloš Zeman does indeed intend to seek re-election. You can Google whether he wins or not.

About the filmmaker - Tomáš Bojar, born 1981, has a PhD in Politics, Law and Moral Philosophy from the Charles University in Prague. He has been active in the film industry since 2003, first as a script-writer, later also as a producer and director. Together with Rozálie Kohoutová he directed a feature-length documentary FC Roma, and recently completed the documentary series The Magnificent Five for Czech Television. He runs a small-scale production company called Cinema Arsenal.