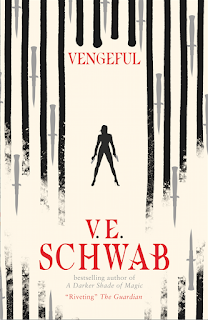 "A super-powered collision of extraordinary minds and vengeful intentions" – V. E. Schwab returns with the thrilling follow-up to Vicious as Vengeful is published by Titan Books on 25th September...

Sydney Clarke once had Serena - beloved sister, betrayed enemy, powerful ally. But now she's alone, except for her thrice-dead dog, Dol. And then there's Victor, who thinks Sydney doesn't know about his most recent act of vengeance. Victor himself is under the radar these days - being buried and re-animated can strike concern even if one has superhuman powers. And Eli Ever still has yet to pay for the evil he has done.

But Marcella Riggins needs no one. Flush from her brush with death, she’s finally gained the control she’s always sought—and will use her newfound power to bring the city of Merit to its knees. She’ll do whatever it takes, collecting her own sidekicks, and leveraging the two most infamous EOs, Victor Vale and Eli Ever, against each other once more.

With Marcella’s rise, new enmities create opportunity—and the stage of Merit City will once again be set for a final, terrible reckoning.

Vengeful is the page-turning follow-up to V.E. Schwab’s 2014 breakthrough adult debut. Introducing original, new characters such as Marcella Riggins, the former mafia-wife who's out for revenge, alongside love-to-hate fan-favourites Victor Vale and Eli Ever, Vengeful marks a stunning return to Schwab’s Villains universe.