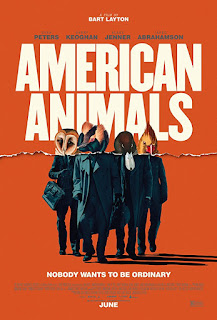 They say the perfect heist is a work of fiction. In a work of fact, Ren Zelen reviewed American Animals...

At the outset of American Animals the words “This is not based on a true story,” appear onscreen, then three of those words disappear leaving the statement - “This is a true story.”

Although American Animals is a heist film at its core, British documentarian Bart Layton, in an impressive feature debut, relies closely on a factual account of real events which took place in 2004. Intercut with the dramatization of the robbery played by actors, are interviews with the actual men who committed the crimes. This makes for an interesting and unusual combination of documentary and dramatic fiction.

During an introductory tour, a group of students, including Spencer, are shown around the Transylvania University library’s secure reading room, which houses some rare and priceless books. Spencer is shown Darwin’s ‘On the Origin of Species’ and on display in a glass cabinet, the library’s centrepiece, John James Audubon’s gorgeously illustrated ‘Birds of America’.

Initially, Spencer is awed by the art of Audobon’s book, but when librarian Betty Jane Gooch (Ann Dowd) tells the group that the books are worth around $12 million, a germ is planted in his mind. A special appointment is needed to view the books, but they are guarded only by the placid, middle-aged Gooch, who is the holder of the keys to the display cases and drawers.

Spencer fantasises about the book and its creator, and muses that he hasn't really had enough adventure in his own life to feed his artistic creativity. Over beer and weed he shares his thoughts with his lifelong friend Warren, who is attracted by the idea of doing something outrageous – ‘Why, after all, need they work through college only to get a boring job in a boring town?’ Wouldn’t it be much more exciting and rewarding to take a lucrative short-cut? He insists that they really need to steal the valuable first editions.

Warren and Spencer are too excited by the thrill of pulling off a heist to sit and develop the painstakingly precise plan that would be necessary to carry off such an ambitious theft. They mostly do their research by googling how to rob a bank, smoking dope and watching a lot of heist movies. As they semi-seriously kick the idea around, a vague plan takes shape.

Warren and Spencer take some secretive trips to New York and then to Amsterdam to meet with a potential fence for the items (played by a sinister Udo Keir). It’s all seems like thrilling, cloak-and-dagger stuff, but the lads are out-of-their-depth.

Soon they cook up a ruse that includes old-man disguises (because as young people they already realize that old folks are next to socially invisible) and colour-coded code names, a la Reservoir Dogs.

The crux of their scheme is working out how to, in their words, “neutralize the librarian” Betty Gooch. No-one wants to get their hands dirty with that problem, they only want to profit from the robbery. Frustrated, Warren agrees to take that job on by cleanly and quickly Tasering her insensible.

Director Bart Layton includes a cleverly choreographed fantasy sequence illustrating how Warren imagines the robbery will go. It features a heist where the librarian is promptly Tasered into painless unconsciousness by young, sharp-suited criminals and the theft goes off like clockwork – just like in the movies.

Of course, the reality is entirely different. The actual robbery proves to be a scary, sweaty shambles of unforeseen obstacles and consequences. The taser assault on the librarian is protracted, scary and messy, as real-life violence actually is. As she tries to painfully crawl away, a shaky Warren alternates with apologizing for putting her through this trauma and yelling at her to stop screaming.

Layton generates a palpable tension around the heist, pivoting on this one violent act, which seemed a minor hurdle in theory but in reality, turns out to be a gruelling ordeal. Of course, Eric, who protested most emphatically about harming Ms. Gooch, is the one dragged into the thick of the event. Meanwhile, Warren frantically tries to figure out certain pertinent details they omitted to consider, such as where the keys to display cases might be kept and how to haul away three massive and weighty volumes of ‘Birds of America’.

The actors, to their credit, play these American idiots as idiots, driven more by their own ego and aimlessness than by material need. Spencer and Warren share a desire for some kind of life-altering experience, a significant event that will pull them out of the rut of the mundane, simply because they are disappointed with college and bored with life in Lexington, Kentucky.

Layton, as in his provocative 2012 documentary The Imposter, directs for maximum suspense but also for comedy. Layton allows the actual criminals (now 14 years older after serving their sentences) to tell their story, and when one person contradicts another, he rewinds the film to make alterations. Layton has four unreliable narrators and offers us the idiosyncratic version related by each of them. It’s a daring approach, but it calls attention to the vagaries of memory and the subjectivity of each individual’s point of view.

The young men are seen to relate self-justifying accounts to each other, to themselves and to us. They resort to the excuse of “we were told we were special” as an explanation. Even the librarian they assaulted echoes this notion as she opines how the boys were so “selfish” in their zeal to be ‘special’ that violence to an unsuspecting, weaker human seemed to be justifiable.

One consistency is that ultimately, they all blame the persuasiveness of Warren. While his parents are divorcing, Warren lets his athletic scholarship slide and reimagines himself as a rebel. It was necessary to find a young actor that could convincingly convey the amoral, subversive attractiveness that drew the other participants to him. The compelling (and underrated) Evan Peters rises to the occasion and is so roguishly charismatic, that Warren’s influence becomes entirely plausible.

Thanks to Layton's confident filmmaking, American Animals ends up being not just the story of a botched heist, but also an examination of memory, subjectivity, responsibility and guilt. It asks the viewer to consider why these relatively well-off and intelligent students would risk their futures, become criminals, and end up in jail, simply because of their feelings of thwarted entitlement.

They wanted so much to be ‘special’ and although writer/director Layton delivers the dramatic goods with great skill, we may be left with a nagging feeling that, despite a sense of exasperation at the foolishness of these young men, by making a film about their antics (and rather a good film at that) American Animals actually gives them exactly what they wanted in the first place – fame and notoriety.