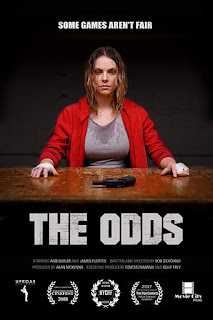 The Raindance Film Festival has announced that psychological horror film The Odds will be the Closing Night film...


A woman enters an underground endurance competition, hoping to win the million dollar prize and turn her life around. As the increasingly punishing rounds progress, she finds herself entangled in a sadistic, manipulative game with no way out.

The debut feature from writer/director Bob Giordano, THE ODDS is a tense, close psychological body horror. Featuring a principal cast of only two, it serves as a powerful allegory for domestic abuse and delivers an agonising viewing experience, culminating in a thrilling final sequence. Keeping the action up-close and personal with a minimal set, Giordano holds the audience rapt with gripping performances and claustrophobic cinematography.

● Carlos Gallardo, producer and actor, will attend the festival to participate in a screening Q&A of Robert Rodriguez’ 1992 classic, El Mariachi. Gallardo played El Mariachi himself, a part which won him the Independent Spirit Award for Best Feature in 1993. Following the film’s great success, Gallardo went on to be co-producer of the Robert Rodriguez-directed Mexico Trilogy sequels, Desparado (1995) and Once Upon a Time in Mexico (2003).

● Academy Award nominated director, Connie Field’s The Whistleblower of My Lai is a fusion of opera and documentary, telling a story that captures both the best and worst of humanity through the examination of one incident in one man’s life - army helicopter pilot Hugh Thompson’s discovery and exposure of the My Lai massacre in Vietnam.

● Prophecy, directed by Charlie Paul, in competition for the Best Documentary award, is a rare, intimate exploration of a single oil painting by celebrated artist, Peter Howson, and the first major film to reveal the motive and techniques behind each stroke of paint as the artist creates;

● Blackbird, festival juror Michael Flatley’s directorial debut of a feature length film, will have a special screening, out of competition, during the festival;

● Styled as a mockumentary, Michael Boccalini and Che Grant’s Love Possibly follows a rom-com obsessed virgin who finds a fiancee on a Russian bride site;

● A.T. White’s debut feature Starfish - a unique, intimate and honest portrayal of a girl grieving for her best friend.

Celebrating its 26th year, Raindance Film Festival will take place in London’s West End from Wednesday 26 September until Sunday 7 October, 2018. A champion of independent filmmaking, Raindance is the largest independent film festival in Europe and has consistently been a great supporter of the UK film industry.