Short Film - All These Creatures 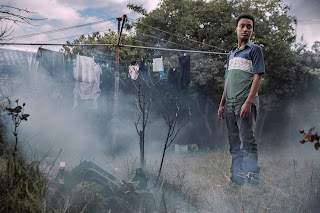 This is a film about mental illness. I’m telling you this upfront to try and make the rest of this review more coherent because this little film caught me off guard a bit.

There is a story to it, told from the point of view of a teenage boy as the mental degeneration of his father starts to impact on him and his family and he looks back over the decline and tries to understand why it happened and what his own future may hold. Letting the boy tell the story himself, as a first-person voice-over worked very well because it felt, in a way, like you were reading his diary or some other very personal piece of writing, experiencing his stream of consciousness almost, and engaging the viewer a lot more in the process.

But, for me, it wasn’t really the words that told the story, I found the cinematography, sound design and editing were just as powerful, if not more so, than the narrative. So it was the overall “feel” of the film that I connected with but in ways I find difficult to describe, it just has to be experienced. And, as an experience, it is stunning to watch. Adric Watson’s use of framing and colours, with some parts of the film feeling like old home movies, slightly off focus and blue tinted garden scenes like a dream or a memory, spliced together with other richly lit scenes of family at home just highlight the “past and present” aspect of the boy’s relationship with his father. The abstract nature of some of the shots, like the cicadas covering the floor, the frogs in the unfinished pond or the red markings on the lecture slides, lend such a symbolically charged quality that, had it not been for the voiceover, this would still be an intense art film. This surrealism and sense of disorientation, much like the confusion of the father’s illness, is added to by the disquieting sound design; the unrelenting chorus of the cicadas, the persistent thrum of the car engine, the repetitious shaking of some kind of nuts or seeds in a roasting pan, all these built on one another, burrowed under the skin and kept me slightly out of step for the whole film, which was, I hope, the intention.

Find out more and book tickets to Raindance Film Festival