Film - "Want to Watch" at Raindance

Raindance Film Festival kicks off on Wednesday and we have browsed the programme for ten films we’d like to see...

Raindance Film Festival, like ourselves, always looks to champion the little guys, the envelope pushing independent film makers, and to give a lift up to the new talent in the industry, which makes it a festival that we always try to cover here on The DreamCage. Where other festivals look to big name directors and bankable Hollywood stars for their gala events, Raindance opts for the interesting and unusual. This year, for example, its opening gala film is a subtitled film from Chile, the country with whom Raindance has partnered this year and which will have several films presented at the Festival. And they picked the ultimate indie film-maker for their Auteur award too in Terry Gilliam, a known name, yes, but one that doesn’t tread a well-worn path with his creativity.

Raindance Film Festival also champions creators who are pushing their own artistic development within the realms of of Virtual, Augmented and Mixed Reality. This year’s immersive strand, Raindance Immersive Stories and Interactive Worlds​, held between Thursday 4th - Sunday 7th October, will let you navigate dreamlike worlds filled with secrets you can discover, transform into a fantastical warrior and embark on an epic journey to Tron-like lands with your friends. Or you can encounter the seven miracles of Jesus or step into Hamlet's mind as his faith in humanity erodes. With 33 experiences, split into dedicated areas for VR installations, and curated playlists presenting 360º films, the Raindance Gallery of Immersive Stories and Interactive Worlds will definitely be worth a visit.

But what of the rest of the Programme? Here, in no particular order and with the synopses from the Raindance website, is our ten film “want to watch” list for this year’s Raindance Film Festival.


In Your Face - The Neil Zlozower Story

Photographer and rock ‘n’ roll scenester extraordinaire Neil Zlozower is the subject of this electrifying documentary by Declan and Beate Maynes. Fondly remembered as a cult figure and ‘one of the band’ by many of the greatest rock stars of all time, Zlozower’s larger than life personality is celebrated in rapidly intercut interviews with the likes of Kiss, Guns ‘n’ Roses, Red Hot Chili Peppers, as well as his closest friends and family. IN YOUR FACE is possessed with the same frenetic energy as the golden age of rock that it remembers. In 90 minutes of back-to-back anecdotes of Neil’s irreverent attitude and quirky antics, the viewer is taken on a wild ride into world of ‘Zloz’ that won’t quickly be forgotten.

Ben (Kelly Blatz) and Amber (Jenny Boyd) meet up in the idyllic heat of tourist Cambodia. They are immediately physically attracted, but what do they really know about one another? An intense psychological horror from previous Raindance award-winner Rudolf Buitendach. Following in the footsteps of folk horrors like THE WICKER MAN, KILL LIST, and SPRING, Buitendach has created a film that is confidently strange and uncannny, without ever being forced. Buitendach's follow-up to the 2017 award-winner SELLING ISOBEL is a lithe and sensuous tale of lust and possession, shot on location in Cambodia and consciously tapping in to some of the folk mythology of that country. What could have very easily been another fish-out-of-water horror film, is actually at pains to develop an unusual relationship at the core of the film, namely the interdependence of Amber and Ben, a relationship which is frequently reconfigured throughout the film. As Ben gets sucked in to Amber's vortex of nasty ex-partners and debilitating physical ailments, he forgets to question what precisely Amber is getting from their relationship, this results in one of the more beguiling and unnerving of closing sequences.

A mother imprints on her daughter the eternal consequences of taking her own life, only for the mother to do just that and to leave her daughter trapped in the care of her murderous stepfather. Using her to entrap local women in bars, Zoe is torn between the fates of his tortured victims and her own immortal soul, unable to escape. Her only hope of redemption may lie in the hands of the other locals. Welsh director Julian Richards has a long track record in low budget horror and offsets the rusty dungeons and genre clichés with shafts of light, both in the cinematography and the potential vigilante who may offer Zoe release. While her brutal stepfather and the small town cop hunting him may be broadly brushed, it’s Zoe’s moral quandaries which represent a number of interesting twists on the nature of domestic abuse, both physical and psychological. Credit that to British actress Jemma Dallender, who always keeps Zoe’s situation compelling through the ambiguity of her portrayal. This sprinkling of UK talent, added to the script’s willingness to ask more interesting moral questions of its characters and a neat final inversion, elevate Daddy’s Girl above the slasher pack.

A Japanese law requires landlords to reveal when a previous tenant has died in the apartment, and how they met their end. To get around the impact this may have on property prices an unscrupulous gangster sets himself up as a ‘room launderer’. Using a sullen young woman, who sees ghosts, he disrupts this chain of tenancy for the benefit of the landlord. Elaiza Ikeda (Isle of Dogs, The Virgin Psychics) stars as Miko, a reclusive 20-year-old who sees dead people, in this wonderfully quirky rom-com about coming to terms with loss and choosing to embrace life. Imagine the Oscar-winning Departures (2008) as directed by Wes Anderson, and you will have some idea of what to expect from Kenji Katagiri’s entertaining debut feature. The film manages to tread a fine line between morbidity and tweeness through charismatic performances from Ikeda and Odagiri, as well as the constant surprise of Katagiri and Tatsuya Umemoto’s tightly structured script.

A sensitive waiter in a toxic work environment becomes upset when he finds out the dinner special is "prawns burned alive on a fire grill." He decides to rescue the remaining prawns and in doing so, frees himself.


Matsuchiyo - Life of a Geisha

Geisha are among the most recognisable cultural symbols of Japan, and yet Western understanding of what they do is still very limited. Few are better placed to tell an audience than Matsuchiyo, a geisha for six decades who has no intention of retiring any time soon. Matsuchiyo tells her story in her own words, from a wartime childhood to the present-day, discussing how both she and the profession have changed in that time. The documentary is directed by her son, Ken Nishikawa, who returns to Raindance after presenting his debut feature, GHOSTROADS: A JAPANESE ROCK ‘N’ ROLL GHOST STORY, at the 2017 edition of the festival. He features heavily in the film, talking about his mother and explaining what it was like to grow up the child of a geisha. In a job where work and home life are so inextricably interlinked - and where to discuss your personal life is the height of unprofessionalism - the insights that only a mother and son can bring to an understanding of the interplay between the two is what makes MATSUCHIYO: LIFE OF A GEISHA truly unique.

Creating is an incredible journey that can open the door to a new universe”. PROPHECY is a rare, intimate exploration of a single oil painting, and the first major film to reveal the motive and techniques behind each stroke of paint as the artist creates. The audience is plunged into the artist’s obsessive mind - and from what starts as a blank canvas emerges Peter Howson’s monumental oil painting, PROPHECY.

Working from his imagination, the darkly comic Howson draws inspiration from world unrest, religious beliefs and mythology, utilising the techniques of his heroes, Goya, da Vinci and El Greco. We discover the intentions and difficulties that push him to create this ambitious, masterful, detailed painting, following every moment until the canvas is sold in New York. The film magnifies the apocalyptic world of Howson’s painting. 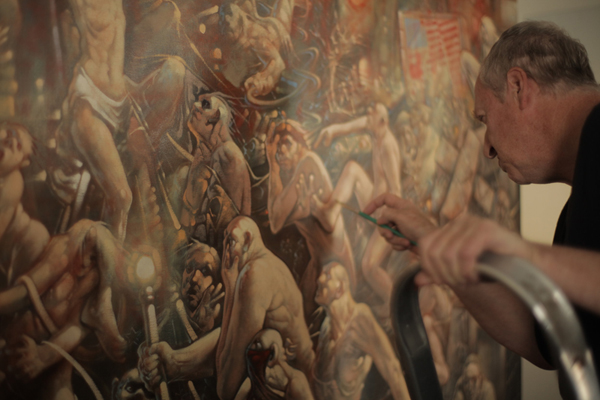 A wander around the counterculture of the 1960s and 70s American west coast, in the company of raconteur, wit, and dedicated performer Rumi Missabu. Along the way Missabu performed with Tina Turner, worked with Andy Warhol, and got to know Allen Ginsberg rather intimately. Even in physical decline Missabu's desire to entertain an audience is paramount. Robert Jackson's feature debut is a generous, funny and joyful documentary about a larger-than-life subject. It serves two disparate purposes, showcasing the life's work of a consummate performance artist, but also digging underneath the mischievous anecdotes and playful personas to get at the person behind these performances, James Bartlett. The film is also about the role of the archivist and archivism in extending the life of the kind of fleeting pursuits that the psychedelic theatre troupe The Cockettes were engaged with. Still busy in his dotage, Missabu has become dedicated to documenting the work and ethos of the counterculture. Jackson's delightful documentary is a suitable postscript.

THE GREENAWAY ALPHABET is a portrait of filmmaker Peter Greenaway; sensitively, intimately, and alphabetically explored by his wife Saskia Boddeke. We begin with Saskia delicately probing and exploring her relationship to him, but it is through conversations with their incredibly perceptive daughter, Pip, that true revelation begins. A is for Amsterdam, says Peter. For Autism, says Pip. We roam through the alphabet of his everyday, his passions, his strongly held opinions, until we reach a brimming encyclopaedia of Greenaway images and words. Constructed with soft touch and humour, Saskia Boddeke achieves a remarkable portrait of her husband and daughter; sixty years difference between their two ages. The tone of the film is playful, but never avoids the painful. The artist discusses his death, his children, his legacy with a plainness that sometimes shocks his family. The biography is not his construct. They interrupt him mid-flow, and scold him from behind the camera. Truth should never stand in the way of a good story, Peter assures us. But we find an intimacy through these family interviews that offers a rare insight into the iconic filmmaker. After its debut in IDFA 2017, THE GREENAWAY ALPHABET now has its UK premiere at Raindance.


The Whistleblower of My Lai

On one day in March 1968, American troops serving in the Vietnam War slaughtered over 500 unarmed civilians in two rural hamlets. One of the largest single massacres of civilians by US forces in the 20th century, the atrocity - referred to as the My Lai Massacre - was only discovered by chance when helicopter pilot Hugh Thompson and his two gunners noticed the events from overhead. Nearly fifty years later, composer Jonathan Berger, librettist Harriet Scott Chessman, Vietnamese multi-instrumentalist Vân-Ánh Võ, tenor Rinde Eckert, and legendary ensemble the Kronos Quartet (Mishima, Requiem for a Dream) combine to create an opera, My Lai, about Thompson (who died in 2006) and his subsequent ostracising by the military and vilification by a congressional committee. THE WHISTLEBLOWER OF MY LAI fuses the preparations for the opera's premiere with a retelling of Thompson's story, detailing the courage of a man who intervened between his fellow soldiers and their victims in order to save what few lives he could. A radical and original work, the opera serves as a testimony to Thompson's morality and is a timely reminder of a shameful historical event which now threatens to fade into the mists of collective forgetfulness.


Raindance Film Festival runs from 26th September to 7th October. Find out more and book tickets on the Raindance Website.