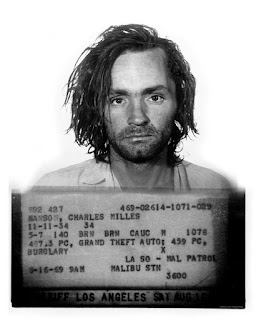 With exclusive access to 100 hours of original footage, including rare interviews, a new 2-part series, Manson: The Lost Tapes, heads to ITV on Thursday 27th  September...

"Whatever’s necessary to do, you do it. When somebody needs to be killed, there’s no wrong, you do it. And you move on and you kill whoever gets in your way. This is us. If we were unarmed we would chew their necks off, anything, claw their eyes out. And they know it… Whatever people have been asking for, we’ll give it to ‘em” - Sandra Good, known as ‘Sandy’, in footage taken by Robert Hendrickson

This series brings to life Charles Manson's world and how he assembled a group of young followers in a commune, four of whom would go on to commit the most infamous series of murders in US history, which came to be seen across the world as the dark side to the hippy movement.

The footage was discovered after British producer Simon Andreae traced the whereabouts of filmmaker Robert Hendrickson, who had been given exclusive access to the Manson cult 50 years ago. His own documentary, Manson, was released in 1973 but banned by a judge shortly afterwards.

A private investigator was hired, who discovered Hendrickson had died a few weeks earlier leaving a vast collection of footage, interviews and photos.

Manson: The Lost Tapes draws on digitally restored and remastered versions of that material along with new interviews with Manson cult members and experts to present the inside story of how an apparently peace-loving commune was turned into America’s most horrifying group of cold-blooded killers.

The first programme tells the story of how Charles Manson, fresh out of prison after serving seven years, drew his young followers in with drugs and free love, set himself up as a Jesus Christ figure, and began to put together his ‘Helter Skelter’ plan.

In a new interview Dianne Lake, nicknamed ‘Snake’ in the cult, tells how she joined when she was just 14 and explains that many of the other youngsters had come from difficult family backgrounds. She says: “My mom and dad were not the warm, fuzzy hugging variety, they really weren’t, and I think that I needed to feel that.”

As the original footage shows, at the ranches where the members lived, they existed on a diet of sex, scavenged food from dumpsters, and drugs. Catherine Share, nicknamed ‘Gypsy’, looks back on her experiences taking LSD administered by Manson. She says: “I wasn’t aware of the fact that he was taking less or none at all. I was aware of the fact that he always seemed like he was in control and I was not.”

But it became apparent Manson had a darker side, Dianne says, after she asked him to make love to her and he responded by brutally sexually assaulting her. She says: “It was more than just a rejection, he abused me, he hurt me. It was like, ‘Don’t you dare ask me for sex.’”

In Hendrickson’s footage, cult member Brooks Poston says also Manson had been working on convincing the members he was a Jesus-type figure. He says: “He looked like, acted like, said the right words at the right time, so to me he was JC, or Christ.”

It worked, explains Dianne. She says: “We did kind of think of ourselves as his disciples.”

Ahead of the horrific events of August 1969, Manson was described as becoming increasingly paranoid, and devised a plan for what he believed would be a race war, named after the Beatles song Helter Skelter, which would place downtrodden black people at the top of society.

The men and women in the cult had already received some training in using weapons. Catherine says: “He taught us to hold a knife so it was, like, part of our fist, and that’s how you do it with a shiv in prison. How to flick it open… We put oil on it and flicked it open like a switchblade. And it was going to be our forever survival tool.”

Paul Watkins, in the original footage, says that three months before Manson hand-picked a group of disciples - not including the pregnant Sandra Good – to begin the killings, the leader confided in him about how good it felt to kill, and also made a grim prediction. Paul says: “He said that one day that up in the mountains of Bel Air and in Beverly Hills that there would be some atrocious murders, that there would be blood splattered over everything. That people would be chopped to pieces and cut up with knives and there would be things written on the walls in blood.”

Manson: The Lost Tapes, heads to ITV on Thursday 27th  September at 9 pm