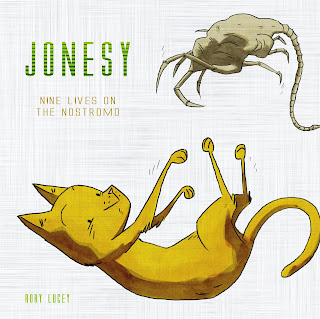 What a genius concept! Telling the story of the original Alien film but with Jones the ginger cat as the central character is something that I thought surely somebody should have thought of by now, given that ** film spoiler klaxon** Jones is the only other survivor from the crew of the Nostromo apart from Ripley but no, this seems to be the first. All the major events of the movie are covered in the book, from the initial unexpected drop out of stasis, to “that scene” with Kane (played by John Hurt in the film), which is wonderfully mimicked by something Jones does, to the suspenseful chase and rescue and the climactic final battle, along with a few extras that you didn’t see in the main movie, like a stunning whisker to exoskeleton meeting as Jones comes face to face with the xenomorph. But, because Jones is the main character, you also get the day-to-day “being a cat” things – scratching up the padded walls of the ship, swiping stuff off the table, chasing cables, licking himself, throwing up in the middle of the floor and generally getting in the way. It’s obvious that the illustrator Rory Lucey has a cat because the movements, mannerisms and expressions of Jonesy are just perfect. The other members of the crew are really well caricatured too in illustrations that are simple and cartoonish but hilarious and you know exactly who everybody is. I also think the book benefits from not having any written description or dialogue to accompany the comic strip style of storytelling as this keeps Jones at the centre of the action rather than shifting the focus to any people around him who are speaking.

This is definitely a book to consider when you start shopping for (whisper it) Christmas presents, as there’s something in it for just about everyone. There’s no icky gore and any peril is on a level with other kid-friendly comics so it’s suitable for all the family. If you are a fan of the film, you will get such a lot of entertainment out of seeing it from a different angle but, even if you aren’t, the antics of Jonesy will keep any cat fan amused. And remember, “In space, no-one can hear you MEOW!”