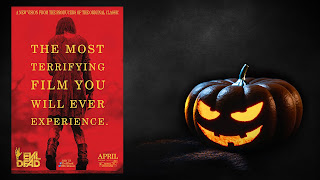 October can mean only one thing here at The DreamCage - it's time to count the days til Hallowe'en with David Ames' Hallow-vent Calendar of horror films! Day 25 is the 2013 remake of Evil Dead ...


Read the review of the original The Evil Dead here.

Cult classics hold a special place in our hearts. They are usually low budget but something about them has stuck in our psyches, whether it is enjoyment or nostalgia or just sheer ridiculousness. Whatever the reason, when Hollywood decides to remake a cult classic, immediately my stomach drops. What if they don’t do the original justice, or what if they lose the aspects of the film that made it so awesome in the first place? When this remake was announced, I was immediately scared that the mainstream would water down and bastardize everything I loved about this film. Luckily, I was pleasantly surprised, and in his directorial debut, Fede Alvarez delivers a wonderful recreation: 2013’s Evil Dead.

The film begins as a group of friends meet up for a sojourn of a few days in a remote cabin in the woods. The group, made up of David and his girlfriend Natalie, Eric, Olivia, and David’s sister Mia, have all met here to help Mia overcome her addiction to heroin. While exploring the area, the group discovers the rank cellar which is filled with the corpses of animals and a large book which looks incredibly menacing.

Like most horror movies, a character defies all worldly warnings and instead does something incredibly stupid. The person in question is Eric who, against the warnings in the book, jokingly reads and incantation which, unbeknownst to the group summons a terrible, dark energy. Mia begins to see things and begs to leave but the group refuses, believing she is just withdrawing. She steals the car but is forced off the road by a demonic entity that proceeds to rape her, causing the possession of Mia to begin.

When she is found and taken back to the house, strange events begin to occur. Mia is found scalding herself with burning hot water and David’s dog is found beaten to death with a hammer. Later in the evening, the real events begin to take place. First, Mia shoots David in the arm with a shotgun, the possession at full power, and then warns all the others that they will indeed die this night. In true Evil Dead fashion, the film becomes more and more gory and brutal, topping the original film in terms of violence rather easily.

I don’t want to give away any more as the ending is something special and should be experienced with a fresh mind. Much like the original film, this remake delivers heavily on the gore and violence and the kills in this version are in many ways much better. With a budget at their disposal, the director was able to produce a faithful yet fully realized version of the cult classic.

Performance-wise, everyone is good. Lou Taylor Pucci and Jessica Lucas are strong in their ancillary character roles, playing Eric and Olivia respectively. They are sympathetic and likeable but their mistakes are fun to watch because you know what will come of them. Elizabeth Blackmore is a good Natalie, romantic with David and concerned about Mia. She is also a tangential character but is perfect for her role. Shiloh Fernandez plays a spot-on David. He cares about his sister and is genuinely worried about her well-being. He also pulls of being strong but with a noticeable emotional weakness in regards to how he feels about his sibling. Fernandez does such a great job with these conflicting emotions and it makes his performance the most honest of the film.

Jane Levy is the real star here, portraying the weak and suffering Mia with a sensitivity and meekness that is quite needed for the role. She is struggling and we are made to feel that struggle. The real magic, however, happens after the possession. The make-up on Levy is enough of an effect that we feel uncomfortable and even a little intimidated by her. Her performance as the demonically possessed young woman is strong and powerful, acerbic and sardonic all at once. She sells this film and her resurrection and transformation from weak victim to powerful demon slayer is magnificent. When she wields the famed chainsaw from the original film, you can’t help but cheer and smile.

This film without a doubt deserves to be watched—multiple times. Not only is the acting solid, the gore and special effects are wonderful. Also, there is a freaking torrent of blood raining through the end of the film. I mean, it is literally raining blood and at one point, everything is red and slick with the stuff. Unlike a lot of failed remakes, Alvarez maintained serious respect for the source material and through that connection, we aren’t disappointed with the outcome. Instead the remake makes us fall in love all over again with Sam Raimi’s classic. I can’t say that I like this film more than the original because it doesn’t really feel like a remake to me. Instead, this film translates like just another addition to a wonderfully fun series of films.