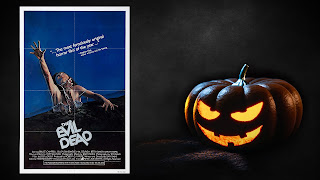 October can mean only one thing here at The DreamCage - it's time to count the days til Hallowe'en with David Ames' Hallow-vent Calendar of horror films! Day 11 is The Evil Dead ...


Sometimes an artist creates an idea and regardless of the money available to them, they pursue that vision to the best of their ability. When this is in the medium of film, we are occasionally blessed with a beautiful, low-budget cult classic. Many films have been labelled as cult classics including such famous works as Black Sunday, Altered States, and even An American Werewolf in London. Today’s film is another one which falls into the cult classic category. It was created for less than $400, 000 and eventually grossed over $29 Million worldwide. Sadly it only made 2 million in the states but the rest of the world picked up the slack, ensuring that the movie would become a classic. This film also launched the careers of its director and main actor. I am speaking, of course, of Sam Raimi’s 1981 horror film The Evil Dead.

The Evil Dead begins as a group of friends make their way into rural Tennessee to spend a few days at an isolated cabin in the woods. There are two couples: Ash and Linda, and Scott and Shelly. Along for the ride is the fifth wheel, Cheryl. That evening, as Cheryl is drawing, she hears a demonic voice asking her to “join them” outside and then her hand begins to draw on its own, sketching an old looking book with a face. She ignores it but as the evening progresses, stranger things begin to happen.

After venturing into the cellar, Ash and Scott find the Book of the Dead as well as a tape recorder previously owned by an archaeologist. They listen to the tape and then strange things begin to happen outside. Cheryl is already heightened and when she hears something outside, she goes to investigate only to be attacked by trees and branches which both physically and sexually assault her. When she makes it back to the cabin, she begs Ash to take her back to town but as they try to make the drive, the are presented with the sole bridge out of the forest in pieces, seemingly preventing them from leaving.

When Ash and Cheryl make it back, Cheryl undergoes a transformation, becoming a hideous demon. The group locks her in the cellar after some serious struggle and there she sits, her eyes barely visible from the crack in the door, and she mocks the group as more and more people begin to turn. Over the course of the film, we are treated to some excellent low-budget gore as Ash tries to protect himself from the onslaught of the demons possessing his friends. Here is where I will stop because I love this movie and you need to enjoy it with fresh eyes, unawares of what is coming.

Firstly, on a very low budget, Raimi and company were able to produce something truly special. It isn’t perfect and there are some glaring errors but overall the film lands and is so much fun. The gore is spot on and the effects of the trees and especially the stop-motion scenes at the end are spectacular. I love that the transformations take three women who are very attractive and then, through the use of prosthetics, wigs, and in some very obvious cases, makeup and black paint, these women are transformed into these terrifying demon-infested corpses. Their eyes are the most disturbing and really sell the mood and atmosphere.

All of the performances are decent. None of the actors are spectacular except the star, who we will talk about a bit later. Hal Delrich (Scott), Betsy Baker (Linda), and Sarah York (Shelly) do a great job and are wonderful undead once they are transformed. Although the others look and perform wonderfully, Ellen Sandweiss is easily the most terrifying as Cheryl. She is mocking and scary and unsettling and her transformation is the first that we see; it truly helps to establish the tone of the film.

As it is a classic, most people know, or have at least heard, of The Evil Dead. When someone mentions the film, the first and usually only name that comes to mind is the legendary Bruce Campbell in his debut and career-defining role as Ash. He carries an almost Fonzie-like swagger that permeates the film every time he is on screen, even when he is being attacked or bitten. Campbell really makes the film what it is and does it even more so with the sequels of the franchise. As much as Sam Raimi is responsible for the film, without Campbell you don’t have Evil Dead.

If you want something fun and entertaining, and something that you may not need to think too hard about, The Evil Dead is for you. Bask in the low-budget practical effects and the effervescent charisma of Bruce Campbell and watch this film. I guarantee it will put a smile on your face.