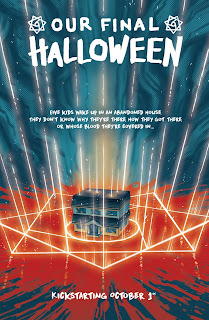 There’s only three weeks until Hallowe’en! This means there’s UNDER three weeks left for you to back the Kickstarter for Our Final Halloween, a new one-shot by Mike Garley, Michael Lee-Graham and Mike Stock. And you won’t even have to wait for the postman...

Five kids wake up in an abandoned house.
They don’t know why they're there, how they got there,
or whose blood they’re covered in...

Gore-splattered, disorientated, and with no short-term memory, these five kids will need to work together to solve the horrifying mysteries of the hellish house, or this will really be their final Halloween.

When co-creator Mike Garley was asked why he was running a Kickstarter right up until publication day, he said “We wanted to make an event comic that captured the fun and excitement of Halloween, which is why we’ve created a Kickstarter that helps us build to a Halloween launch. We’ve commissioned an original sound track (featuring the track from the Kickstarter video below,) essays on horror, guest artist pin ups, and guests’ posts leading up to the launch of the comic on the 31st.”

Perfect timing for a Halloween read then, so here’s a sneaky peek at the first couple of pages of the comic, just to whet your appetite (click on the images to see them better)… 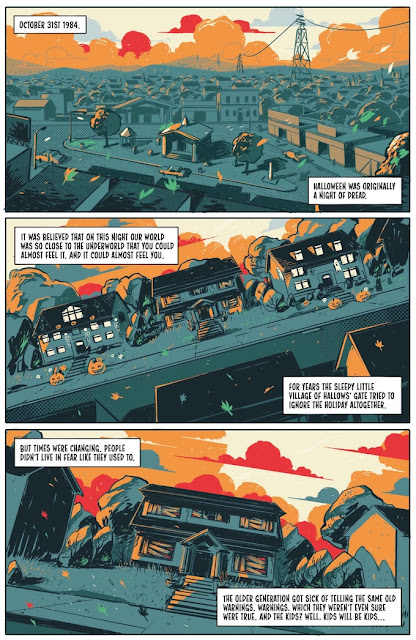 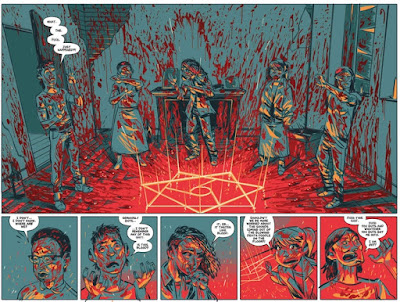 Oh, and why don’t you have to wait for the postman? Because Our Final Halloween is going to be a digital-only comic that will be made available to backers on the 31st of October. And there are some great upgrades on offer, all for less than the average price of a Pumpkin Spiced Latte (note, other Halloween flavoured hot beverages are available and the comic is less than the price of them too).

For just £3 you can get your virtual mitts on the digital comic itself as a Halloween treat in your email. Add the price of a fancy biscotti (just another £2) to get the comic AND a whole pile of extras in the Director’s Cut – there’s guest pin-ups, horror essays, the incredibly funky 6 track sound-track, oh just loads of added bits. But if you really want to treat yourself to a bigger rush than all of that sugar put together (and why shouldn’t you, it is Halloween after all) pledge just £7 to get the Director’s Cut AND Behind the Scenes extras like concept art, alternative covers, production notes, the list goes on. And so should you. Go on, I mean. You know you want to…

Watch the comic’s Kickstarter trailer below then throw your support and pledges, but not your coffee, behind the campaign at http://kck.st/2NWJPpe