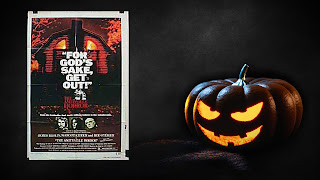 October can mean only one thing here at The DreamCage - it's time to count the days til Hallowe'en with David Ames' Hallow-vent Calendar of horror films! Day 10 is 1979's The Amityville Horror...

In the annals of history there are a myriad of supernatural cases which have crossed international barriers to become world famous. Many know about the Winchester Mystery House in California, Raynham Hall in Norfolk, England, and the Fairmont Banff Springs Hotel in Canada, but there are few which can rival the infamy of a riverside home in a small suburban neighborhood in Amityville, New York. This story would become legend, eventually being investigated by numerous parapsychologists including world famous demonologist and medium couple Ed and Lorraine Warren. The film I chose today is the only one that is truly “based on a true story.” Today we will look at Stuart Rosenberg’s 1979 classic The Amityville Horror.

Based on the book of the same name by Jay Anson, The Amityville Horror follows the true story of the Lutz Family (George, Kathleen, Greg, Matt, and Amy) as they suffer through the haunting of their newly purchased home. While the story the Lutz family has told about the events in Amityville is questioned and looked at as a cashgrab, there are numerous elements of this story that can’t be falsified:

1. A year before the Lutz family moved into the house, Ronald DeFeo Jr. went room to room throughout his home and murdered his mother, father, and four siblings with a shotgun.

2. All of the bodies were found face down as though no one had even heard the shotgun blasts, including two brothers who shared a room.

3. During his trial, DeFeo claimed that he was awoken every night at 3:15 am and that voices began to drive him insane, eventually leading him to commit the murderous rampage.

4. A year later the Lutz family moved in and began to complain of supernatural and possibly demonic phenomenon which was terrorizing the family.

This is all the true, historical information. The movie itself follows the ever increasing phenomenon that terrorizes the family. Unlike most of the reviews on this year’s Hallow-vent calendar, I won’t be doing a play-by-play of the plot. Instead I will mention some major haunting events. While Kathleen and the boys are tormented by poltergeist activity and nightmares, Amy has made friends with a mysterious “imaginary friend” named Jodi. While all of this is happening, George has begun to undergo a complete personality shift. Initially he was loving and caring and wanted more than anything to make a home but as the film progresses, he descends into madness, becoming angry and withdrawn. Obsessed with maintaining the family fire, George has begun to be woken up at 3:15 am each day and begins to compulsively chop wood, ignoring all other things including his job and eventually even his family.

The local priest and Kathleen’s aunt, a nun, come to bless the house but are chased away by unseen forces and then tormented in their own lives. The nun becomes sick to her stomach but recovers. The priest, on the other hand, is tormented by his experience in the house and, although his diocese won’t look into the haunting, he won’t let the feelings drop. Instead he begins trying to call the house and to pray fervently for the family. Sadly, he is tormented by unseen spirits even away from the home, spirits that eventually cause him to go blind.

The film crescendos when George is taken to a local bar where he is told that he looks just like “that boy who murdered his whole family a year ago.” George and Kathleen both uncover what they think is happening at the house in their own separate ways but converge on the property and together rescue their family and dog from the torments of the home.

I absolutely love this film. It sets a wonderfully eerie tone right from the beginning, letting us follow Ronald DeFeo Jr. as he executes his family. Later, in a brilliant bout of parallel editing, these same shots are interwoven with Kathleen and George’s initial tour of the home.

The music is incredible. It is eerie and haunting and almost ethereal. I especially love the children’s choir which sings the theme of the film. This style of score seems to have been recreated in films like The Lost Boys and even A Nightmare on Elm Street. Without the brilliance of Lalo Shifrin’s score, the movie would lose a lot of its creepiness.

The performances of the cast are all pretty great. James Brolin is wonderful as George and his transformation is done masterfully through both the makeup and Brolin’s character acting. Margot Kidder is absolutely gorgeous in this film, looking better than I can ever remember and her portrayal as a worried but loving mother and wife is pitch perfect. She is sympathetic yet strong.

If you have never seen this film or only seen the 2005 remake, you need to do yourself a favor and check out this classic. It is a slow burn but done so well as to not drag even a little. The slowly building dread and uncertainty help this film establish its mood and atmosphere and aid in making this film one of the best haunted house movies ever.