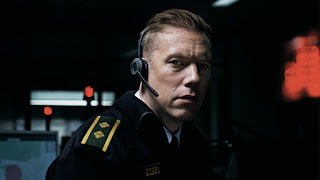 Steve Taylor-Bryant took the call and watched The Guilty...


Gustav Möller co-writes, with Emil Nygaard Albertsen, and directs this Danish entry to the Thrill segment of London Film Festival and, to be honest, The Guilty has exhausted me emotionally and physically. The Guilty sees Jakob Cedergren play Danish police officer Asger Holm who, for reasons we find out in dribs and drabs throughout the film, is on administrative duty, confined to the phones of the Emergency Response team. Asger answers the phone, takes some details of the incident being reported, and then contacts the relevant dispatch crew to attend and deal with whatever has occurred. We hear a guy who has taken speed and is now panicking, we get a man mugged in his car in a red-light district, and then we get a terrified woman pretending to be on the phone to her daughter so the man beside her doesn’t realise she is on the phone to the police. Asger soon realises he has a kidnap victim on the line and does his best to get a location, or a vehicle description and hopes that dispatch can trace the vehicle before it is too late. Is he successful? I cannot and will not answer that for fear of giving away spoilers and I don’t want to ruin a film for you that you must see for yourselves.

Scandinavian filmmakers have a habit of making emotionally dark film and television, and it appeals to a lot of us myself included but, amongst the darkness of a plot or a character development, there is usually a beautiful landscape or two, or some action that adds to the narrative. Not here in The Guilty. If it wasn’t for a couple of interactions with fellow Emergency Responders you wouldn’t see another cast member, and if it wasn’t for Asger finishing his shift but wanting to see through the kidnap investigation so he moves to a private room, the film would have been set in one room. Do you remember Phone Booth? The Colin Farrell film? Right, picture that but in a claustrophobic space with no background action and no other visible cast. The pure loneliness of the entire set up immediately puts a viewer on edge and through the film Möller, and the superb portrayal of Asger by Cedergren, grinds you through the emotional wringer and by 80 minutes in, just two minutes from the film's finale, my head was in my hands and I was shattered emotionally, I was mentally drained, and I was so physically tense I couldn't stand up. An entire kidnap plot, with conversations with the victims six-year-old daughter dropped in for good measure plays out over the phone. There are no police cars or shoot outs or physical restraint or dramatic rescues, just a man with a telephone headset and a voice on the other end of the line. It’s that simplicity, led by Cedergren’s astonishing performance that adds the levels of terror you feel that you have never felt from a film before. And when the twist hits you about half an hour before the end prepare for your soul to physically weep.

The Guilty is a rare treasure in thrillers, where the simplicity of a concept is left to an actor to carry and for an audience to buy in to. Once you have committed yourself as a member of the viewing public to The Guilty, the way you view thrillers and the expectations you have from film will never be the same again. The cleverness of the writing, to keep a simple story without being dared to expand on the simplicity, is just top notch. Any facts you may need as a viewer are drip fed to you throughout the film and the performance of Cedergren is just astonishing. I do not recall ever seeing one actor have to carry such a dramatic role all on his own before and what a tremendous job Cedergren does. The Guilty is a once in a generation game changing film that affects a viewer like they were there, like they were involved. It's harrowing.