Doctor Who - The Bells of Saint John 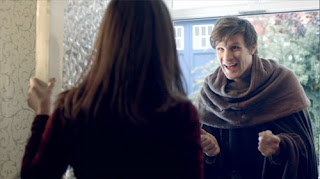 Our Doctor Who expert, Tony Cross, is journeying through all of time and space to bring us his thoughts on every available Doctor Episode. Today is the Eleventh Doctor adventure The Bells of Saint John...

Clara 'Oswin' Oswald must be the most introduced companion in Doctor Who history. First, she pops up in Asylum of the Daleks then in The Snowmen and once more here, in The Bells of Saint John. The Doctor doesn't seem to be having a problem with goodbyes now, but he is struggling a bit with hello.

Anyway The Bells of Saint John is a reasonable start to the second part of Series 7. It re-introduces Clara and this time she appears to be about to come on board the TARDIS for the Doctor to solve the problem that she appears to represent; it sets up the return of a returning villain and lets Steven Moffat make jokes about Twitter. It also features one of my all-time favourite creepy moments in Doctor Who, but we'll come on to that.

The only problem is that because its main function is to get the Clara story rolling along - again - the actual adventure itself feels a little inconsequential. The Doctor seems to knock off the enemy in an afternoon. He almost doesn't have to break sweat, which is slightly annoying because I love the idea of 'something in the internet’: a World Wide Web of Fear if you will. And yet it almost seems thrown away here.

Now I often don't like Steven Moffat's ideas about who the Doctor is or how he should behave. Or his ideas about what constitutes a good companion in Doctor Who, but I am beginning to admire his craftsmanship. The way he allows us to take a breath in the middle of a manic romp so that we have time to gather our thoughts before the next rush is admirable. Sometimes he gets a bit carried away and the rush overwhelms the story so that you find yourself at the end thinking, "Well, that was good but I'm sure there's something wrong there somewhere." Then you pick holes in the thing until all you have is holes. But when he gets it right, he gets it right.

And The Bells of Saint John gets it mostly right. It just feels a little throwaway.

There's a wonderful performance from Celia Imrie as Miss Kizlet - also a favourite in Patient Centurion Towers anyway since Acorn Antiques. Plus, she appears in one of my favourite films of all time Heartlands, which stars Michael Sheen and I heartily recommend - which ends with that creepy moment I mentioned earlier: her reduction to her original factory settings. The realisation that she's just a lost little girl is both sad and rather creepy. It's not often you end up feeling sorry for a villain, but then Steven Moffat does like shades of grey.

I'm not going to say too much about Matt Smith. There's only so many times I can say how much I like his performance, although I'm not sure I'm entirely comfortable with the Doctor being quite so 'touchy-feely' with women he doesn't know. I know the whole 'Clara thang' means that the Doctor feels that he has a mystery to solve but - just occasionally - the Doctor seems to behave like an intergalactic stalker. I mean does the Doctor strike you as the sort of person who would go off to a Medieval monastery to paint pictures of Clara and contemplate what she means by her last words? The Doctor's an 'on his feet' thinker not the contemplative sort. After all that's why he left Gallifrey in the first place. This is a point I may come back to. Or not. Let's see how my whimsy takes me.

I do like Jenna Coleman though. Two (and a tad) stories in and her performance has won me over in a way that Karen Gillan's Amy didn't initially. [I grew to really like her and Amy in the end. It just took a bit of time to warm to her.] She's got energy and a certain sparkiness, which combined with her timing makes her rather interesting to watch. Yes, on the base level she's another pretty female companion that is part of a problem for the Doctor to solve but if you're going to do that as your cliché de jour then best get an actress that's can make that character interesting. Still early days yet. I may change my mind. It happens. More often than you'd think based on my ranting.

The Spoonheads are a nice little thing too, although I'm never quite sure why neither Clara nor Miss Kizlet run away from the thing when it tries to download them. Perhaps you can't but it does seem a bit odd. The scene in the cafe with Clara just feels wrong. Maybe it is just me but as soon as I realised that the Spoonhead was a Spoonhead I'd be on my feet and away as fast as possible. I know I'm a coward, but would you just sit there and stare?

Love the Motorbike. Especially up the Shard. That's the sort of moment that people always think is rather silly, but I always think of as being the sort of thing you can only do in Doctor Who and get away with it. There's not many other series that could - or would - try that sort of thing. Of course, I have a high tolerance for the 'silly' in Doctor Who, which would probably not endear me to Christopher H. Bidmead, but you can't have everything.

So that's pretty much it. The Bells of Saint John was a fun piece of Doctor Who fluff. It's entertaining, a little silly and gets the job of re-re-introducing Clara to the audience. Let's see how that goes shall we?