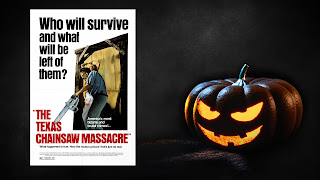 October can mean only one thing here at The DreamCage - it's time to count the days til Hallowe'en with David Ames' Hallow-vent Calendar of horror films! Day 7 is the 1974 classic Texas Chainsaw Massacre...

In 1974, there were few if any movies that crossed certain lines. The film we are talking about today crossed every single one and hilariously still tried to get a PG rating by avoiding extensive gore. They were not successful and this film received an R rating anyway; something it definitely deserved. This is one of the first movies I can ever remember making me feel incredibly uncomfortable, especially with all the strange images of human and animal bones combined in strange sculptures. I am talking, of course, of Tobe Hooper’s 1974 cult classic The Texas Chainsaw Massacre.

The film opens and is immediately effective as it describes the “true” events which the movie will portray. The opening text with the strong voice and the near silence as a backdrop set the mood for the rest of the film. Then, we are treated to an opening shot of a corpse that has been defiled and staged on top of a grave. A quick cut takes us into a van where a group of friends and siblings make their way across Texas to deal with the apparent defiling of their grandfather’s grave. Sally and her wheelchair-bound brother Franklin are escorted to their grandfather’s grave by their friends, Pam, Jerry, and Kirk. The trip is going good and they are enjoying the scenery, talking about nearby slaughterhouse and their family ties to it when they come across a hitchhiker.

They allow the man into the van but he is acting erratically and eventually cuts himself while laughing hysterically and talking about the proper way to kill cows (with a sledgehammer). Eventually he cuts Franklin’s arm with a straight razor he had concealed and is kicked out of the van. He screams and wipes his blood all over the side of the vehicle as they drive away. Seemingly away from danger, the group stops at a gas station only to be informed that they are out until the fuel delivery comes in. The group makes their way off to Sally and Franklin’s family homestead and Franklin informs the others about a swimming hole nearby. When Pam and Kirk stumble upon a house, Kirk goes inside to find gas but is confronted by a mountain of a man wearing a mask made of human skin. Kirk is dispatched with a sledgehammer (see the connection) and when Pam comes into investigate, she is taken and impaled on a hanging meat hook, becoming one of the most iconic images in horror.

As the day progresses, the other three begin to worry and Jerry goes to look for the two missing kids only to stumble upon Pam half alive inside a freezer, all before he is also taken out by Leatherface, the killer from earlier. Finally the last two go looking but are confronted when Leatherface takes a chainsaw to Franklin and begins erratically chains Sally through the woods and into the house where she stumbles upon desiccated corpses of Leatherface’s grandparents. When she escapes through a window, she stumbles to the gas station only to be recaptured and brought back to the home. She is forced to sit down to dinner in one of the more unnerving scenes in the film. We also get to revisit the character of the hitchhiker, Nubbins, who turns out to be Leatherface’s brother.

Sally eventually escapes to the main road while being cut repeatedly by Nubbins. She is rescued by a Truck driver who is ultimately chased off by Leatherface but fate would intercede and She escapes while Leatherface swings his chainsaw angrily around the air.

This movie is a horror classic for a reason. It is incredibly disturbing and what they were able to accomplish with a very limited budget is definitely impressive. Although there is little to no gore, what we do see is effective enough to cause the blood to stir. The costumes are time-period specific in the best possible way and it isn’t anything fanciful. It really is just a bunch of kids in a van. Hooper chose mostly unknowns to keep the budget down but each of the actors does well in their respective roles. Allen Danzinger (Jerry), Paul Partain (Franklin), and William Vail (Kirk) are all good in their roles, and although they are all one-dimensional, they are convincing. Teri McMinn is great as Pam and her scene on the meat hook alone garners her some special recognition. Marilyn Burns is spot-on as the haunted Sally who sees her brother murdered in front of her and is then subjected to all kinds of horror at the dinner scene (my favorite of the film). Her crazy green eyes and screaming are perfect and really establish her as one of the scream queens of horror.

Gunnar Hansen is great as Leatherface and his hugely intimidating presence and weird, inability to speak are all haunting aspects of his character portrayal. His particular build, similar to the way Kane Hodder is recognizable as Jason, is a key component of his presence. Lastly, the most convincing performance for me is Edwin Neal as Nubbins, the hitchhiker. He plays manic and psychotic perfectly and really adds a sense of unmitigated fear to the film. He is completely brutal and unsettling and you are never quite sure when he will fly off the handle.

If you have never seen this movie, you are seriously missing out on something that has seemingly inspired everything from Rob Zombie to Kevin Smith. Also, just to answer that ever-present question: no, this is not really based on a true story. Leatherface is VERY loosely based on Ed Gein, a killer and grave robber in Wisconsin in the 1950s. Still, this movie and its iconic camera flash sound are so uniquely disturbing, especially for the time, that it is always worth a viewing…or two.