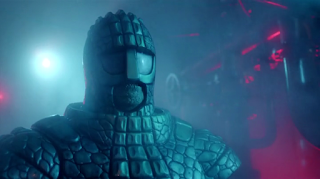 Our Doctor Who expert, Tony Cross, is journeying through all of time and space to bring us his thoughts on every available Doctor Episode. Today is the Eleventh Doctor adventure Cold War...

Cold War is a lovely new Doctor Who tribute to Patrick Troughton's era of Doctor Who. It's got a 'base under siege', it's got an Ice Warrior and it's got HADS (last seen in The Krotons if my battered memory serves.)

We find ourselves on board a Russian submarine. It's 1983. The Cold War is on. [D'oh] Mankind edges close to its own mutually assured destruction. It's a tense time. And as Stepashin demonstrates this is a Cold War with hotheads on both sides.

It's an interesting choice to make it a Russian submarine and not a US or UK submarine. It adds a certain amount of tension that might not have been there in those circumstances. It also makes us - and how intentional this is I don't know - that we are all humans. We've all got families. We're all afraid. It asks us to be sympathetic to a group of poor Russian submariners who get bumped off rather unpleasantly, the poor two crew members who get diced and sliced to help Skaldak 'understand' humans. It's a nice touch by Mark Gatiss. This is a far better attempt at showing the horror of battle and war than Victory of the Daleks, because it is far subtler.

It also rattles along at a hell of a pace, even with a few slower scenes in there to allow us to take a breath. The action starts from post-credits and doesn't really stop. There are however a couple of fine slow moments. All of which involve Clara.

One of which is unusual in Doctor Who. It starts when they find the - off-screen mutilated bodies - of the two Russian crewmen. Clara's reaction is genuine shock and then afterwards she has a conversation with Professor Grisenko - played by the legend that is David Warner - about how what she's just seen makes her realise that this just got 'real'. It's very rare for Doctor Who to acknowledge the horror of what a companion sees and how it might affect them. It's not dwelt on for long obviously because we can't have Doctor Who getting 'too real'. Let's face it lots of people die in the Doctor Who universe. In a myriad of different horrible ways. They die individually. They die in millions. They die on screen. They die off screen. The good guys die. The bad guys die. Death is ever present in Doctor Who but rarely to we dwell on it because let’s face it if we did then the whole Doctor thing would be a lot less fun and the series incredibly bleak. [This subject has been on my mind today as I'm listening to the audiobook of The Greatest Show in the Galaxy and am reminded of how utterly bleak Bellboy's death is in that story. Possibly the bleakest moment in the whole history of Doctor Who]

The Ice Warrior looks fab. They've tweaked the design a bit, but it is faithful to the original design. And it looks massive and genuinely rather terrifying and unstoppable. I do have a quibble with the creature inside it. It just lacks the same kind of imaginative oomph that the external design does. It's a sort of Pensioner Ninja Turtle merged with the fingers and hands of a Martian from the 50s film version of War of the Worlds, which may or may not be deliberate. They're both Martians after all.

The Ice Warriors are one of those old-school Doctor Who monsters that have a culture. It's more hinted at in the television series than explored but both Big Finish and The New Adventures Novels explored things in more details. They've been under-used throughout really and Steven Moffat wasn't a big fan because he saw their slow, heavy breathing lumbering ways as the perfect bad monster to translate into the modern era. Mark Gatiss apparently sold him on them with this story. It should be noticed that Skaldak's voice was far less hissy, which helped with clarity. It is, of course, provided by Nicholas Briggs.

Skaldak's given a bit of character beyond just the big bad guy. He's woken up having slept for 5000 years. He thinks his race is gone. He misses his warrior daughter and their Songs of the Red Snow - if I've remembered that right - which gives Clara a chance to reach him by singing. Quietly. In fact, except for Clara's singing moment, the final confrontation between Skaldak and the Doctor reminded me of the final confrontation between The Seventh Doctor and Morgaine in Battlefield as the Doctor tries to convince an alien menace of the dangers of releasing a single nuclear weapon. Whisper it but I think the Battlefield scene is done better.

Matt Smith's good in this but Jenna Coleman really shines. It's nice to see a companion who is genuinely scared and worried about what she is caught up in. The rest of the cast are also excellent Liam Cunningham does stolid bearded work well. David Warner plays the eccentric Professor Grisenko with style and his scene where he tries to distract Clara from everything that is going on around her is lovely.

So whilst it isn't the best Doctor Who story ever made it does a fine job of being both entertaining and a rather wonderful throwback to the Troughton era. A Classic Doctor Who story in New Who clothing. Even down to the return to (sometimes obvious) model work whenever we see the outside of the submarine sitting on the rocky sea bed. I like it.