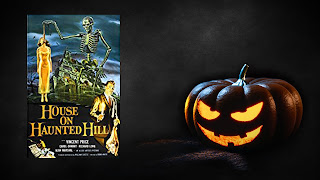 October can mean only one thing here at The DreamCage - it's time to count the days til Hallowe'en with David Ames' Hallow-vent Calendar of horror films! Day 8 goes back to the 1950's for the original House on Haunted Hill...

For today, I wanted to go back quite a few years and see a classic. My sweet spot for horror movies is usually either the 1980s or more modern psychological fare but today I went really old school. This film had been mentioned on numerous top 25 lists as an absolute classic and honestly, I had never seen it until today. I love the remake but have never had the opportunity to watch this gem until now; I was very pleasantly surprised. Today we discuss William Castle’s 1959 classic House on Haunted Hill.

This film begins as five strangers arrive to a rather large, supposedly haunted house on the invitation of an eccentric millionaire who is planning a party for his wife. These people have never met and have no direct ties to one another except for their desperate need of money. Frederick Loren has offered to pay everyone who makes it through the night alive $10, 000. This kind of offer couldn’t be turned down so the strangers arrive and are immediately unsettled by the strange occurrences that begin to befall the group. We learn that Frederick and Annabelle have a very rough relationship. They both psychologically and physically abuse one another. He is convinced that she poisoned him and wants him dead to inherit his money while she feels he is jealous and abusive and wants her dead because of her exploits outside the marriage.

One of the guests, a young woman named Nora, who is prone to bouts of “hysteria” (according to another guest: Psychiatrist Dr. Trent) begins to see things which frighten her. Lance, a test pilot, helps to calm her and as she explores the house alone, she comes face to face with Annabelle. She tells Nora that her husband is a brute and is planning something diabolical this evening, something she reiterates with the rest of the guests behind Loren’s back. The group which is rounded out by Pritchard, the owner of the house and the bastion of ghost knowledge concerning his property, and Ruth, an elderly newspaper columnist, are given a tour of the house, including a vat in the basement full of acid which was used by a previous owner to help kill his wife. After being given handguns, the group is left to the own devices and told to survive until morning.

Nora is attacked and, because of the stories told by Annabelle, is convinced that Loren is plotting to kill her. Lance tells her to hide so she will be safe but they hear a scream and when they investigate, the discover that Annabelle has been dead from an apparent suicide by hanging. The events which follow and end the film are shocking and classically scary.

I don’t want to give too much more away but suffice it to say that this film’s twists and turns are more Agatha Christie than Wes Craven. This movie is more mystery than horror but it has some definite genre elements including interesting makeup, great set design, and some very fun props.

The performances are all great. The guests are represented well, especially Carolyn Craig who plays Nora. She sells every scare and fear and does so with such convincing gusto that you can’t help but feel for her. She is borderline a final girl in that in the end she takes a stand and grows a spine to strike back at her attacker. Other great performances by Alan Marshal (Dr. Trent) and Richard Long (Lance) tie the main cast together well.

I had a soft spot for Elisha Cook who portrayed Pritchard. He was creepy in just the right way and took the role of consistent, fear-stricken and put-upon owner to the best possible place. He was always there to chime in and remind the viewer that the ghosts were real. Even though the film feels as though the ghosts were orchestrated to scare the guests of the party, Pritchard always appears to refocus and reiterate that indeed the spirits will kill them all. He reminds me so much of the crazy old guys in horror films who warn the group that they are all going to die (Think Ralph in Friday the 13th or Jud Crandell in Pet Sematary).

There needs to be a special paragraph set aside for the brilliance that is Vincent Price, who portrays Frederick Loren with the perfect balance of power, fear, intelligence, and guile. When Price is on screen, it is hard to pay attention to anyone else and although he is soft spoken for the entire film, his voice rings clearer and more effective than any other actor on screen. He deserves all the respect he gets for his films and this role is a real crowd pleaser.

The effects are from the 1950s so if you hate old corny or hokey props and scares this film probably isn’t for you. Personally I love seeing older horror movies and catching things that other films years later referenced or alluded to. I will say that I watched this movie twice, once in black and white and once in the colorized edition and the color really does work well with the film. If you have a chance to get the color edition, please do. Also, give this film a chance this Halloween. Not only is it a classic—it is so much fun and who doesn’t love to solve a murder mystery?