Doctor Who - The Crimson Horror 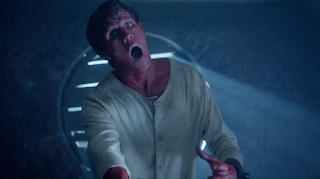 Our Doctor Who expert, Tony Cross, is journeying through all of time and space to bring us his thoughts on every available Doctor Episode. Today is the Eleventh Doctor adventure The Crimson Horror...

Ah The Crimson Horror. I wrote, at the time of broadcast about some of the more troubling aspects of this story in a blog called Doctor Lad so I don't propose to re-visit those issues in detail. Suffice it to say on re-watch I'm still not entirely comfortable with some of what is going on, particularly with the Doctor and Jenny but hey and ho.

The thing is apart from that this is a pretty good story. It's Mark Gatiss' second story of the season, after Cold War, and possibly his best so far. It's got a nice period setting, Victorian Yorkshire with a touch of the gothic. It has a sort of contemporary Talons of Weng-Chiang aspect to it.

It's structured in an interesting fashion with the initial part of the story revolving around Madame Vastra (Neve McIntosh), Strax (Dan Starkey) and Jenny (Catrin Stewart) aka The Paternoster gang investigating the 'Crimson Horror' on behalf of a very faint gentleman whose name escapes me as I write this. It turns out that the last thing the most recent dead man saw was The Doctor. So off to 'The North' goes The Paternoster gang.

Jenny gets sent inside the rather mysterious 'Sweetville', a model village project of the kind so favoured of the forward-thinking Victorian philanthropist. In this case the mysterious Mr. Sweet* and Mrs Gillyflower (Diana Rigg) who is both villain and archetypal blunt talking Yorkshire woman. Mrs Gillyflower has a blind daughter that she rolls out to convince potential settlers in Sweetville of the horrors of the demon drink. This is Ada (Rachael Stirling, who is Diana Rigg's actual daughter. **)

Diana Rigg is brilliant. Mrs Gillyflower is sharp, cold and focused on creating a perfect world for her people to settle down in. To achieve this, she's prepared to sacrifice everyone else, including her daughter. The relationship between Ada and Mrs Gillyflower is probably the darkest part of this story, which is helped by Rachael Stirling's sterling - sorry - performance as Ada. Who it turns out saved the Doctor. The actual main villainous plan is a bit bog-standard Doctor Who. It could even be a steam-punk James Bond story if it wasn't for the identity of Mr. Sweet.

Mr. Sweet it turns out is a surviving member of a parasitical leech-like creature that Madame Vastra's Silurian kinsfolk had issues with back in the day. He's become 'close' to Mrs Gillyflower, who has been milking his venom for her plans. It is highly likely, of course, that Mr. Sweet will come to a sticky end but I'll let you see that for yourselves.

The Paternoster gang are as much fun as usual and this story gives Jenny a real chance to shine. First undercover and then when - in a Victorian Emma Peel cat-suit - she dispatches several Mrs Gillyflower's servants. Strax is still the comedy Sontaran: a toddler with laser weapons and grenades. I like Strax. I just wish he hadn't become the pattern for all Sontarans. It's a waste of a good race of baddies. Although you could argue Classic Who got there first with their portrayal in The Two Doctors but that would mildly undermine my sniffy little point so I shall pretend I haven't mentioned it and move on.

The Paternoster Gang are, of course, a bit surprised to see Clara but the Doctor never gets around to answering their questions about who she might actually be. As the season approaches its end I'm beginning to suspect we're getting close to an answer. There's a nice moment in the end scene with the annoying children*** where she sees a picture of herself that is supposed to be Victorian London, but it isn't her. It's the other Clara.

Oh and before I forget I love the way they do the Doctor bringing Jenny up to date on how he ended up dipped in red gunk. It's all sepia, snaps and short scenes. It's rather cleverly done. And there's even a Tegan reference for the Dads and Mums, which is nice. It certainly helps make the story more structurally interesting than the plot probably deserves.

Would happily re-watch this one.

*I swear for a moment I thought they were going to sneak the Kandyman back in to Doctor Who when I heard about this story and saw the red gunk that was going to appear, which I thought was a bizarrely radical decision from Mr. Moffat. Alas I was wrong.

**I'm sure you all know that but I'm putting it in as one of those pieces of standard trivia to earn myself some obvious trivia points. As you do.

***I'm sorry but they manage to be annoying in the short scene at the end of this episode and it doesn't bode well for the next story that they're in it for much more. I mean what does the threat to tell your Dad that Clara is a time traveller mean? Dad's going to go..."Oh really. Well you're fired." And not go 'Oh don't be silly. Time travel.' Even the pictures could be explained away if you wanted. Plus, who took the picture in the submarine...and... oh don't get me started. I'm beginning to dislike Nightmare in Silver already and I've not even seen it. Again. Talk about pre-judging a story. But really Mr. Moffat what were you thinking.