Doctor Who - Nightmare in Silver 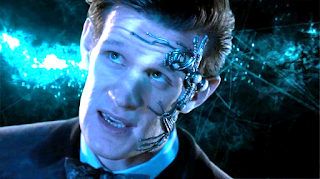 Our Doctor Who expert, Tony Cross, is journeying through all of time and space to bring us his thoughts on every available Doctor Episode. Today is the Eleventh Doctor adventure Nightmare in Silver...

Nightmare in Silver is rather disappointing. After Neil Gaiman's rather brilliant The Doctor's Wife I had high hopes for this story but in the end, with a couple of exceptions, I didn't enjoy it very much.

Firstly the two children - Angie and Artie - are an annoyance of the highest order. Is there anything more tedious than children complaining about being bored whilst travelling through space and time? Plus, neither of the child actors does much to make me like either of them. Thankfully they're side-lined quickly, which saved me from turning the blessed thing off.

Secondly the Cybermen. I've said often in these articles that the Cybermen often disappoint in televised adventures, whilst Big Finish seem to do a proper job with them.* This is another example. There's no point throwing in nods to Earthshock or Tomb of the Cybermen if you're going to make another disappointing Cyberman story.

The re-design does look lovely I'll give them that but Gaiman makes the mistake of 'upgrading' them to an almost invincible Borg style creature, which is supposed to make them more terrifying but only ends up making you think that the writer is painting himself into a very difficult corner. The ending isn't a terrible one but there really isn't that much tension to it from the moment The Doctor throws off his Cyber mind sharer. Basically, somewhere along the line, despite all the clever new Cyber tricks, Cybermites and Cyber special effects, the Cybermen still aren't scary enough.

I'm not sure what the solution is. I think it might be that the Cybermen are at their best not in huge armies. At least not originally but when they're small in number, lurking in the shadows and when we see the horror of the conversion process. Their vulnerability had become ridiculous in the later years of Classic Who but re-jigging them to these invincible things removes some of their - and yes, this is an odd word to choose - 'humanity'. The horrifying thing about the Cybermen was always the fact that they were 'once like us', which is why despite their old-fashioned look now the original Tenth Planet Cybermen would be the scariest. It's why when Star Trek: The Next Generation created the Borg they kept some of that human flesh in there. They're us as we might be.

I also like the setting. The abandoned Theme Park with its Comedy Castle with its weird hints of Scooby-Doo is rather interesting. It's a twist on a base under siege ending as it does in a last stand at the Comedy Castle.

Also I quite liked most of Matt Smith's battle with the Cyber Planner. The inside of the Doctor's mind has certainly improved in quality since we last saw it in The Invisible Enemy and not a prawn in sight. Matt Smith's performance is mostly excellent, but I think I could have done without the Ninth and Tenth Doctor impressions.

Ignoring the children - and I intend to never speak of them again - most of the performances are good. I can't really fault the acting from the rag-tag punishment unit that is basically a selection of clichés, including Tamzin Outhwaite's Captain; Jason Watkins as the poor unfortunate Webley and especially Warwick Davis as Porridge. I like Porridge. I hope we get to see him again, even if his secret is now out.

So it wasn't all bad, but it was mainly not that great. Perhaps I was more annoyed at the time because I had high expectations of Neil Gaiman. He's a fantastic writer but I suppose to hit us with two brilliant stories out of two would be too much to ask. It is, for me, the weakest story of the second part of the Seventh Season, which is a shame.

*If you want to see how to do a genuinely creepy surviving Cyberman chess playing robot story then I recommend you listen to Big Finish's The Silver Turk, which I reviewed here, which I'm afraid makes A Nightmare in Silver look very poor indeed.