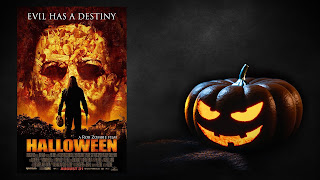 October can mean only one thing here at The DreamCage - it's time to count the days til Hallowe'en with David Ames' Hallow-vent Calendar of horror films! Day 15 sees him start his run of remake reviews with Halloween from 2007  ...


Read the review of the original Halloween here.

I LOVE classic horror, especially the slasher films of the 70’s and 80’s. Michael Myers, Jason Voorhees, Freddy Krueger, Leatherface—all of the characters who had scared me when I was little, made me laugh when I was older, and simply entertain me now. In all of their incarnations I can find something that I genuinely enjoy. With that kind of endorsement, I know that I was fanboy pissed when I heard about a remake of Halloween. The original was the first slasher movie I had ever seen and the creepy, expressionless white mask was something that freaked me out for years after I saw the original. Even when I found out later that the mask was of William Shatner, that didn’t detract in the creepiness factor.

In 2007 when I saw the first trailer for Rob Zombie’s Halloween, I was beside myself with vitriol and bitterness. How could someone take a classic and try to reinvent something that, other than the original Black Christmas, really helped to create a genre of films that I had grown to love. The original Halloween was damn near perfect and there was no way that this could be anyway near the quality. It was going to suck. I was sure of it.

Now here is an unpopular opinion among horror movie enthusiasts: I fucking loved it.

With a movie like Halloween, I don’t really need to delve into story. Anyone who genuinely loves the genre has seen Halloween, usually multiple times. For those who haven’t…for shame…SHAME! But I will give you a little heads up, just to be safe. A sociopathic young boy slaughters his sister on Halloween night and then is locked in an insane asylum for years. He breaks out, travels back to his hometown of Haddonfield, Illinois, and proceeds to track down his little sister from years ago, trying to finish off the family line. Much like many slashers, he is relatively unkillable.

Now for the Zombie version, I know that there is a lot of moaning and complaining about the backstory of Michael Myers. For myself, while I hate revisionist stories that try to humanize the villain, this wasn’t quite the case. We see a kid whose home life does indeed suck, but while there may be pity. The young kid is still incredibly messed up and is obviously both a sociopath and psychopath. The backstory didn’t take away from his brutality, but in my mind added another level.

Once we see Michael as an adult, he is a hulking man. Unlike the original films who had slightly tall guys who were skinny and otherwise nondescript, this Michael Myers is a giant mountain of a man. Tyler Mane, the actor who plays Myers is 6’8’ and weighs 300 pounds. He is a very imposing figure and it helps add a new depth of fear. Not only is Myers unstoppable—he also towers over everyone. The film is brutal, as a slasher film should be. There are incredibly intense moments and the gore does not disappoint. The kills are vicious and represent a shift from the 70’s to now in terms of horror sensibilities. Myers is no longer silent. He doesn’t talk but he does grunt and his movements, while still slow, are much more aggressive than they used to be.

Laurie is portrayed as a nice girl who studies and enjoys her life. She is the more innocent of the main three girls, but she isn’t as closed off as Jamie Lee Curtis’ Laurie. Much like Myers, this is a new Laurie for modern times. She isn’t naïve and she makes some lewd comments but she is still the classic archetype of the “final girl.” Scout Taylor Compton performs wonderfully and my god, does she have the pipes to be called a scream queen. Her screaming in this film could shatter glass at points.

Famous actor Malcolm McDowell (A Clockwork Orange) has big shoes to fill, playing Doctor Loomis, the role originally portrayed by Donald Pleasence, but he does just that. He comes across as sympathetic and worried but completely realistic. He wants to help Michael but knows that nothing truly can. While I like Pleasence, I have to say that I think I prefer McDowell (although that may be because I love him in pretty much everything).

Overall, despite all of the bitching about Zombie’s wife, Sherri Moon Zombie, being in the film, and the complaining about the darkness of the film, I genuinely enjoy this movie. If you have been reading my reviews, you know that while I will admit when something is poorly done, I always try to simply enjoy the films I watch. I don’t like to be one of those people who simply shit on things just to do it. I love film and I want to enjoy what I watch so my view may be slightly skewed but, being completely honest, I think this is a film that is utterly watchable still. We may not want to talk about what happened after this because Halloween 2 was a different story entirely (although the opening 30 minutes or so were some of the most intense and well-shot horror sequences I have ever seen). I understand what happened there though: Zombie didn’t want to make a sequel and the studio forced his hand so he straight up killed everyone so they couldn’t make a third.

Still, the second should in no way detract from the first. It is amazing and scary and intense—everything that a slasher film should be. If you watched it and hated it originally, I implore you to take another look at the film and don’t look at it as a remake. Just go in hoping to be engaged in a horror movie. If you remove the nostalgia of the original and look at this as another in the series, Zombie’s Halloween is amazing—the perfect slasher for the 2000’s.

I know that this will be an unpopular opinion but I genuinely enjoy the remake better than the original. I know that this is blasphemous and I would never do anything to detract from the brilliance of the classic. I just have to say that they are both equal in my eyes and if I had to choose one to watch more often, it would be Rob Zombie’s 2007 version.