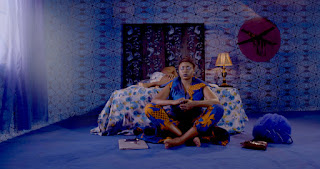 Screening this week as part of the Amazing and Astounding selection of short films at London Film Festival, Steve Taylor-Bryant watched Hello, Rain...

From the Thrill category of the festival this year comes a thirty-minute Nigerian film from a very interesting filmmaker by the name of C.J. ‘Fiery’ Obasi about wigs made from Juju magic and science that present the wearer with magical superpowers. Now this concept may sound a little crazy, and to be fair it really is, but in the way, it has been put together by ‘The Fiery One’ it makes one sit up and take notice, the whole point of film. Hello, Rain is stunningly beautiful straight off the bat, whether it’s the Nigerian dress worn by the three protagonists Rain (Keira Hewatch), Philo (Tunde Aladese), and Coco (Ogee Nelson), or the colour pallet in the landscape used, especially the market with its brightly coloured stalls, or the special effect backdrops you are going to get vivid colour on every step of your journey through this film.

The special effects scenes, highly reminiscent of a 1970’s science fiction ‘B’ movie, are a real throwback to a past era. Slow motion, silhouettes against coloured screen, quite rigid shots all make for a very interesting take and whilst the story of power providing wigs might be a bit daft the sheer beauty of how that power unleashes itself in the films visuals is quite staggering. The film is brilliant, highly watchable, and full of lunacy, but it is not without flaw. Much of the thirty minute run time is taken up with Rain’s narration and the script is a great accompaniment to the visuals but in places Hewatch’s voice is slightly too soft and the soundtrack slightly too brash and this conflict in sound is quite overpowering, although it does remind me a lot of the problems we had with sound in the 1970’s and 1980’s low budget sci-fi and horror films so it may very well have been intended, but for me it smacked slightly of student film standards which is not my experience from the rest of Hello, Rain which I found to have incredibly high production values for a film that tries aesthetically to play down its visuals.

All in all, Hello, Rain was a joy. It was an assault to the senses that was incredibly welcome and provided me with the strangest half an hour of film watching I have had in a long while. C.J ‘Fiery’ Obasi has a wonderful eye for a visual and is obviously not scared of telling story that on paper may make no sense and for that risk taken its worth giving Hello, Rain a watch.


Find all the short films in Amazing and Astounding and book tickets HERE.