Film - The Ballad of Buster Scruggs 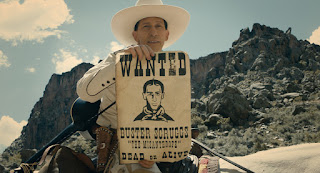 I never met a Coen Brothers’ movie I didn’t like – I guess I have to admit that straight off the bat. Certainly, I like some of their films better than others, but for me, the Coens are some of the most adept, original, imaginative and engaging storytellers working in film today.

As the pages are turned we see the printed tales, prefaced by an illustrated plate featuring a dramatic scene from the story. The film was originally meant to be a multi-part television series (for Netflix) consisting of six tales, but earlier this year, the project became one entertaining, if eclectic, movie.

The films of the Coen brothers have often taken inspiration from old Westerns, and in Buster Scruggs they go right back to the fundamentals. Some of the stories are comedic, others tragic, some are a bit of both. Fortunately, each story manages to be interesting in its own right, and all are told in their uniquely individual style.

Their characters are eccentric, if not bizarre, and many have an extensive and amusing command of language. However, they are rarely entirely heroic – they are a mixture of good and bad and often far from perfect. However, this is what also makes their protagonists so refreshingly unpredictable and compelling and, sometimes against our better judgement, irresistibly charming.

The first segment does deal with ‘The Ballad of Buster Scruggs’, and is about a crooner cowboy, portrayed by Tim Blake Nelson, (a longstanding Coen player) who also happens to be an outlaw gunslinger. As well as being able to sing well on horseback, Buster has the appealing quality of being cleverly loquacious while being able to maintain a good-humoured courtesy in the face of every event, no matter how disturbing or violent.

‘Near Algodones’, stars James Franco as a luckless bank robber, and is a droll tale of surprises, narrow escapes and rough justice, told with the Coens’ signature eccentric humour and containing some of the most amusing scenes and best lines of the film.

‘Meal Ticket’, comes as a bit of a contrast. A somewhat grim and vaguely gothic tale set in the snowy frontier lands. It features Liam Neeson as a theatrical impresario, travelling through dreary camps and rough towns presenting his star turn (Harry Melling), a quadriplegic known as the “wingless thrush” because of his mellifluous voice and affecting way of reciting great poetry, the Bible, Shakespeare and even the Gettysburg Address.

‘All Gold Canyon’, gives us Tom Waits (it took me a few moments to recognize him using a less croaky singing voice) playing a gnarled and seasoned gold prospector, who stumbles across a rich seam in an idyllic spot, but then finds his luck does not come without a price.

‘The Gal Who Got Rattled’, is perhaps the most affecting and heart-breaking story of all, with a wonderful performance by Zoe Kazan as a bereaved and innocent young woman who joins a wagon train, hoping to find a new and better life out in Oregon, but becomes embroiled in other events along the way. In its drama and sweeping vistas, it is reminiscent of the classic Western films of John Ford.

The last story is called ‘The Mortal Remains’, an enigmatic but atmospheric chiller in the style of Ambrose Bierce. It takes place during a moonlit stagecoach ride through a dark and foggy landscape. On board is Tyne Daly as a stern and religiously inclined matron confronted on the ride with challenges to her sense of morality in the form of an odoriferous and talkative fur-trapper (Chelcie Ross), a cynical and rakish Frenchman (Saul Rubinek) and two ‘businessmen’ seated opposite – a raconteur in Jonjo O’Neill and his amiable Irish business partner, Brendan Gleeson, partial to singing sad songs. The last passenger is a corpse that is strapped to the roof.

In The Ballad of Buster Scruggs the Coens treat the viewer to stunning landscapes of prairies, snow-bedecked forests, dusty or mud-splattered townships, deserts and verdant valleys. Their cinematographer Bruno Delbonnel somehow manages to shoot the American wilderness to match the mood of each of their stories.

The casting is excellent throughout. The Coens and their regular casting director Ellen Chenoweth have a formidable talent in matching characters with faces and getting delightful, heart-breaking or sinister performances from their actors, right down to the most minor of characters, so that each one remains individually memorable.

Having originally meant to be a series of different tales, it is not surprising that the stories can differ in tone, but The Coen brothers turn this variation to their advantage. The changes keep the viewer in a state of anticipation, not quite knowing what to expect.

However, I would say that all six tales share a common moral – ‘life is not easy, death the only certainty, and the hand of fate can strike at any time, in any way’. The Coens approach this notion from a different tonal and thematic position in each tale, though always with eccentric humour and a bittersweet perspective, and, as in almost all Coen films, it’s all about the journey, not the destination.

The Ballad of Buster Scruggs will be released by Netflix in November. Buy tickets to see it at London Film Festival here.