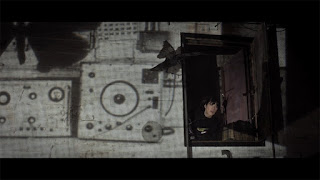 Premiering tonight as part of London Film Festival's "This is the Sound, This is the Picture" selection, Steve Taylor-Bryant watched the short film Delia Derbyshire: The Myths and Legendary Tapes by Caroline Catz...

I am of course familiar with the theme tune to the BBC science fiction show Doctor Who. I have been a fan since I was a small child and that theme holds a significance in my memories of family time, bath time and jelly and ice cream were finished and now I sat, terrified at the thought of Daleks. What I didn’t know about was the gender politics of the time and the fact Delia Derbyshire, a name common in my musical household when I was younger, didn’t get an official credit for her work on the theme until 2013, some twelve years after her passing. With my familiarity of the theme and not much else I didn’t really know what to expect from this thirteen-minute-long short film by Caroline Catz but what I got was incredible.

Delia Derbyshire was known to have quite the flamboyant personality and a very articulate scientific mind alongside incredible music producing skills. She played various instruments to a high level and saw the beauty in the sounds of ordinary and mundane objects, so quite how you play out this life in a short period of time was a little beyond my imagination but Caroline Catz seems to have a filmmaking skill akin to Delia’s music production. It's kind of mad but works. Playing sporadically throughout the film are clips of an interview first heard on radio in which Delia Derbyshire delights with snippets of information, and to some fans this would be more than enough, but Catz complements the dialogue on the interview with some acting from herself that is pretty spellbinding. Delia’s thoughts of science hit strongly and the whole “Music is an expression of maths” is a concept that my unscientific mind doesn’t quite grasp but the way Catz films herself, alone in a warehouse with images projected on the walls surrounded by stuffed animals, mad props, and ancient tape cutting machinery, gives the unscientific like me a visual glance into the chaotic mind of a genius, either that or its art school experimentation but I prefer to think it’s the former and either way it is beautiful to look at.

Catz embodies Derbyshire well, from all the television and radio appearances I can remember listening and seeing Delia on, Catz has got the personality and look down and nails the voice, but there is more than that in Catz’ performance, there is genuine admiration and that can't be acted. I learnt a little more than I knew before, Derbyshire’s love of the abstract sound of the Blitz air raid sirens from her childhood holding a special significance for her was new to me, but what I took most from this wonderful short is that Catz is highly watchable, has an honest and upfront love of her subject matter, and that there is much more about Delia Derbyshire that a wider audience should know. I’d love for Caroline Catz to be afforded the opportunity of bringing this idea to television audience in a special drama much like we had with Mark Gatiss’ An Adventure in Time and Space for the fiftieth anniversary of Doctor Who. If you get the chance to watch Delia Derbyshire: The Myths and Legendary Tapes I urge you to do so, if you are the head of a drama production company I urge you to get in touch with Caroline Catz and get a bigger version made.

Find out all the short films in "This is the Sound, This is the Picture" and buy tickets HERE.