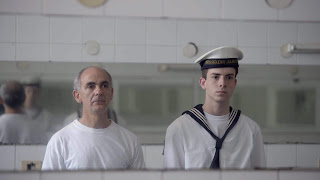 It is slightly artificial in construction without ever crumbling into wanky intellectual frippery, I think because, at the centre of something theatrical, there is heart. It never lets the process of telling the story drown the stories themselves.

It lets veterans of both sides tell their stories without being judgemental. It also does a fine job of never avoiding the disagreements that remain about the sovereignty of the Falkland Islands-Malvinas*. Indeed, the way each side refers to the Islands by their respective selection of names without the other stomping all over it is symbolic – in my opinion – of Arias trying not to let the stories be lost in the argument. This isn’t about the politics of ownership of the land, but it doesn’t ignore the history either.

There’s a scene where one of the British veterans talks with one of the Argentinian veterans about the history of the islands. Their regular exchange of colonial claimants over a long period of time, before the British finally took control properly in the mid-19th century after which nothing much appears to have happened with the ownership until Argentina invades. It also reminds me that the one group of people this film never really talks about and from whom we never hear are those settlers living on the Falkland Islands-Malvinas. This is a story about a war that appears to have had no civilians and yet they were there. Does the absence damage the film? Probably not.

The fact that the director of this film is an Argentinian might make you think it is about the Argentinian experience at the expense of the British and there is a scene – scripted – where the British soldiers complain about that in a bar. Arias herself, in a Q&A session after the film, says that there were obviously some real issues there as the person leading this project was both Argentinian and a woman. Both things Royal Marine Commandos might have issues being led by.

But she also said that one of the impacts this film had in Argentina was on the perception of the fallout of the war on the British soldiers. There was a perception that as professional soldiers – and the victors – the British military never really had the problems that the defeated and largely conscript Argentinian soldiers had upon their return. But this film shows this to not be true. Indeed, I’d argue us Brits also failed to appreciate the impact of the war on our own men at least until recently.

Coincidentally I recently finished reading Helen Parr’s ‘Our Boys: The Story of a Paratrooper’, which is the story of her uncle who died, aged 19, in the Falklands. There’s so much more to the book than that though. It is a history of the Parachute Regiment and its culture; a social history of Britain and its relationship with the military; the impact of fear, death, grief and survival on the men and families involved in the fighting. It’s a much less arty telling of the British military experience than this, but you should read it if you can. I thought a lot of that book when watching that film.

The one relationship that really seem to develop in the film is that between the Royal Marine, Lou Armour – who tells a story that is repeated three or four times through the film – and the Argentinian mortarman, Marcelo. At the beginning they claw to communicate with each other, even though neither of them is fluent in the others language, but later there’s a scene where Lou is demonstrating self-defence techniques to Marcelo, which feels bizarrely intimate even though it is built around acts of violence. But perhaps I am veering towards the pretentious.

The other point Arias made was that when we see these men in their mid-50s telling their stories it is them we see in our minds yomping across the Falklands/Malvinas, but it wasn’t them. It was their younger, different selves. They were 18 or 20. They weren’t far off being kids. She tries to address that in a final scene where Lou Armour’s story is told again, and the older men are gradually replaced by younger doppelgangers (of sorts) and you are jarred from the dangers of seeing all this as the stories of old-men.

I found this a moving, occasionally funny and occasionally awkward, film. It isn’t a conventional documentary – if there is such a thing – but its theatrically helps try to break the story out from the trauma that the men’s experiences are wrapped in.

If you get a chance you should watch it.**

*It is interesting that I find writing ‘Malvinas’ difficult. I feel like in some way using the Argentinian name for the Islands is a kind of betrayal, but that’s my own problem. It is interesting how throughout the film both sides stick to their own names. No one ever takes the other’s name for the Islands. It’s almost as if there is power in a name.

** It also made me realise that I bought, a long time ago, a film called ‘Blessed by Fire/Illuminados por el fuego’, which was an Argentinian film about the Falklands/Malvinas that I haven’t yet got around to watching, but now I feel I should.