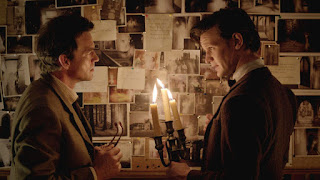 Our Doctor Who expert, Tony Cross, is journeying through all of time and space to bring us his thoughts on every available Doctor Episode. Today is the Eleventh Doctor adventure Hide...

Hide has some rather good bits, a bit of average and a bit of hmmm about it. In fact for about thirty minutes it is spectacularly good: atmospheric, well-acted and occasionally terrifying. Then we discover what the 'ghost' is, which is clever but a little dull. Then we get a bit tacked on at the end that is nice in its sentiment but rather silly.

Other good bits. A fine pair of performances from Dougray Scott as Professor Alex Palmer - a relation of Harry Palmer's perhaps - and Jessica Raine as Emma Grayling. Both characters have a little more depth than is sometimes the case in Doctor Who. Professor Palmer is a button-up and closed down incredibly modest war hero. The sort of man that might keep a Victoria Cross in his attic.

Actually before I go on brief moment of quibbling here. The Doctor's a bit glib at dropping in information about people in this story. He does it with Professor Palmer - and reveals to Emma that the Professor has been lying about his war service - and he does it later when he spits out a lot of information about Hila Turkurian (Kemi-Bo Jacobs). The Doctor gabbles a lot in this story. Perhaps it is because he's been more scared than usual. He's certainly less good at hiding it than usual here.

Anyway back to Dougray Scott and Jessica Raine. Whilst Professor Palmer is emotionally buttoned-up Emma Grayling is a psychic empath, which means she's able read people's feelings, which brings its own difficulties as the Doctor explains without realising the impact his little information dump is going to have on Emma. It takes Clara to stop him. So as well as gabbling in this story the Doctor does his fair share of babbling too.

Both Scott and Raine give excellent performances and their strength helps pull the story through its less impressive final fifteen minutes.

At points during the first half-an-hour this story is genuinely quite scary and atmospheric. It seems to have picked up hints from both The Stone Tapes and The Omega Factor in terms of how to do haunted house stories. I love the hints of things in the dark.

I should also point out that once again I like the fact that Clara is actually genuinely quite scared at points throughout this story. Barry Letts once said that key to Elizabeth Sladen's performance was her ability to act scared and brave at the same time and Jenna Coleman has this knack too, which makes her a highly likable companion.

Part of this story's purpose is to remind us of the mystery of Clara's situation. The TARDIS doesn't seem to like her very much for mysterious reasons, although the TARDIS does do the right thing in the end. The Doctor also had his own hidden reasons for bringing Clara here. He wanted to run her past Emma Grayling. However that doesn't reveal anything much to us. She is, Emma insists, an ordinary woman. To the Doctor though she's the great mystery to be solved. Anyway whatever she is Jenna Coleman is pretty good.

Matt Smith's good in this even allowing for the excess babbling. There's a couple of lovely scenes : one with Dougray Scott in the dark room where Professor Palmer's reasons for wanting to go ghost hunting are explained and one in the TARDIS with Clara when they're talking about how the Doctor sees people.

The problem is it all becomes a bit dull once the ghost is explained. Then there's the secondary monsters. These are brilliant handled and their movements are creepy and strange. The only mistake is to show it close up when its more obvious costume nature is a tad obvious. It doesn't happen often in New Doctor Who so it is more noticeable when it does.

So it isn't a bad story this but the final few minutes don't quite live up to the brilliantly atmospheric first half an hour.