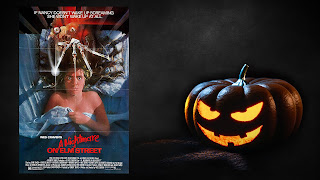 October can mean only one thing here at The DreamCage - it's time to count the days til Hallowe'en with David Ames' Hallow-vent Calendar of horror films! Day 14 is the classic A Nightmare on Elm Street ...


So it has been a great two weeks but today we come to the end of phase 1 of the Hallow-vent calendar. I wanted the last of the original horror films I watched to be something very special. The movie we are talking about today is the one that established one of the most iconic of all slashers. Also, this is my very favorite of the original slashers because not only is it unnerving and creepy, it is also a very well-executed film. To close out our original films, today we will look at Wes Craven’s 1984 masterpiece A Nightmare On Elm Street.

The film begins when Tina, a high school student at Springwood High School awakens from a nightmare where she was being stalked by a disfigured man with a gloved hand covered in blades. Her mother points out that Tina’s nightgown also has slashes cut into it. Visibly shaken by her nightmare, Tina seeks comfort from her best friend Nancy and Nancy’s boyfriend, Glen. The couple agrees to spend the night with Tina but their evening is interrupted by Rod, Tina’s boyfriend. Later, as Tina and Rod are sleeping, Tina experiences yet another dream, this time being attacked and stabbed by the mysterious man. While she is still asleep, Rod watches as she is murdered. Slashes randomly appear on her body and she is drug all over the room, even across the ceiling.

Rod is arrested for Tina’s murder and Nancy is very shaken up by the events, losing sleep and dozing in class. There she is chased by the same man, who reveals himself to be Freddy Krueger, later revealed to be a child murderer who was released on a technicality and then burned to death by the members of the town in a bout of vigilante justice. Nancy can’t wake up, but after she is chased to the boiler room in her dreams, she burns herself purposely on a pipe which causes her to awaken. Then, like most slasher movies, the cast begins to die off, one-by-one, until only Nancy is left. Their final confrontation is spectacular but if you haven’t seen this landmark film, I don’t want to spoil it for you. Just make sure you stay on past the ending and get to the teaser.

As a film, A Nightmare on Elm Street is very well-executed. The acting is pretty damn great, considering the cast is full of relative unknowns for the kids (Johnny Depp does make a pretty awesome appearance as Glen). Tina, portrayed by Amanda Wyss, is very believable as a high school student, and she does everything to garner our pity when she is killed. Nick Corri, as Rod, is a textbook badboy and plays the part with all the gusto and machismo needed. The supporting cast is also pretty great, including wonderful turns by John Saxon (as the police officer, Lt. Donald Thompson) and the always brilliant Lyn Shaye as Nancy and Tina’s teacher.

Lastly are the two main stars who are truly responsible for the success of not only the original film but also the numerous sequels. Heather Langenkamp, as Nancy, is the perfect final girl. She is shy and adorable, pure and thoughtful. She cares about everyone else on the screen and it comes through in her performance. Her struggles and insecurities are paramount to the character and Langenkamp nails those character traits perfectly. Also, when she assumes the role of power at the end, her strength shines through moreso than almost any other final girl I can think of. On the flip side of this coin is the man, the myth, the legend: Robert Englund, whose portrayal of Freddy Krueger has become so incredibly famous that he is now one of the most recognized faces in all of film. Englund plays him with such a sincere note that the performance screams unnerving qualities. As a multi-faceted actor, Englund not only plays the dark well—he also handles the dark jokes in a way that lets the humor stand while still instilling serious dread. Without Englund at the helm, this character falls flat (which we will talk about later this month).

The gore and effects are also spot on. Whether it is Tina being thrown all over her room or Freddy’s face pushing and pulsing through the wall or Glen being consumed and then regurgitated in a blood geyser on his bed, Craven’s group delivers the special effects better than any other movie the director has helmed. My favorite shot of the entire movie is one of those brilliant director/cinematographer choices: when Nancy is asleep in the tub and we are given a POV shot looking up at her from in between her legs and the bladed glove appears out of the water before pulling Nancy down into an endless ocean of water…that is the sweet spot. It is scary and interesting and really delves into the psychology and metaphorical rape and violence that the final girl suffers in a slasher movie.

The children’s song is haunting and the fear of what happens to us while we sleep is help to make this film something special. If you haven’t yet seen A Nightmare on Elm Street and you have been holding out because you thought Freddy Krueger was stupid and childish, you should do yourself a favor and remedy the situation pronto. While later installments in this franchise focus hard on comedy (Looking at you Freddy’s Dead), the original is a genuinely well-crafted and unnerving piece of film. It is something that any fan of horror movies, or even other genres honestly, should be required to watch. It is a classic and takes my top place in the realm of slasher films. Just remember: whatever you do...