Doctor Who - The Name of the Doctor 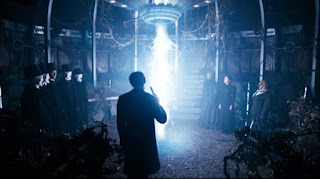 Our Doctor Who expert, Tony Cross, is journeying through all of time and space to bring us his thoughts on every available Doctor Episode. Today is the Eleventh Doctor adventure The Name of the Doctor...

And so, Series Seven comes to an end with The Name of the Doctor, which on original viewing I utterly adored from the moment we found ourselves on Gallifrey a very long time ago. On this second viewing I still enjoyed it quite a lot, but not quite as much.

Things I ignored on the original watch popped up to annoy me a little more this time. Then I told myself off for being a grumpy old-school Doctor Who fan. Then I thought that a bit of quibbling does no one any harm. Then I thought I should stop thinking quite so much about the whole thing and get on with writing this blessed article.

As I mentioned this starts off magnificently with Gallifrey, Hartnell and Clara. Yes, Clara. We are finally going to get to the bottom of 'The Impossible Girl'. Eventually. We get a nice, if odd, selection of old Doctors running in and out of Clara's life. Or vice versa as it turns out. Jenna Coleman gets to wear a fine selection of outfits and hair styles. It's an interesting set up, which is then topped by a brilliant sequence revolving around a 'Conference Call'. It balances funny, odd and then genuinely creepy as someone gets at Madame Vastra and Jenny. Yes, the Paternoster Gang are back. And Dan Starkey, Catlin Stewart and Neve McIntosh are as brilliant as usual. I like The Paternoster Gang. They should have their own show. Also back is River Song. It's all hands to the pump here for the season finale.

Matt Smith is brilliant in this. Absolutely wonderful. In a few short minutes he goes from a rather silly scene to a genuinely heart-breaking moment when Clara mentions Trenzelore. The Doctor knows what Trenzelore is. It's where he's buried. It's where he shouldn't go but it is where The Whispermen want him to go. But the Whispermen are just minions. Our real foe is an old enemy, The Great Intelligence. As played by Richard E. Grant.

The Great Intelligence's plan seems rather odd. He drags the Doctor to Trenzelore because he wants access to his grave. He requires The Doctor's name to access it. So, will we finally discover the Doctor's name a secret almost no one watching Doctor Who has ever been bothered about, except The Moff himself. We do, of course, never learn the Doctor's name because The Moff knows it would be a stupid thing to do. Either because it'll be a massive disappointment or a ridiculous joke.

Being a Time Lord the Doctor's less a corpse more a very impressive floaty light thing. A timey-wimey scar across the Universe. The Great Intelligence plans to step into that timeline & wreck his revenge on The Doctor, even though it will destroy The Great Intelligence to. The process creates a Universe without the Doctor. Again. Like the Big Bang. And the stars start going out. Again. Like the Big Bang. Which is one of my quibbles about this episode.

The concentration on the personal impact of the Doctor's disappearance though - via Madame Vastra's loss of Jenny & Strax's reversal to normal Sontaran behaviour - puts a slightly different spin on things. As does our realisation that this isn't the living River Song, but the echo. Theoretically only Clara can see her. Although it turns out the Doctor can too.

I know a lot of people don't like River Song, but I do. She's well portrayed by Alex Kingston and I don't mind the romance with the Doctor. I think Matt Smith sells it well and their little scene here is lovely. I do think though that the story might have run its course, although that remains for The Moff to decide.

The Great Intelligence is doing his worst - and being destroyed, which is the bit of his plan that baffles me a bit - but Clara steps in to the Doctor's timeline too and undoes all the bad stuff whilst explaining why she's been in the Doctor's timeline before. Why she's the 'Impossible Girl'. Except now we know the truth she's no longer impossible. She's the Explained Girl.

Jenna Coleman's great here. Despite my slight mehness about the whole Impossible Girl thing I've quickly grown to like Clara and a lot of that is down to Coleman's effective performance.

The first time I watched this the last sequence annoyed me a bit as I thought The Moff's rescue of Clara by The Doctor was a cop-out. Clara's inside the Doctor's timeline, which just looks a bit like Trenzelore if we're honest. Perhaps it is. And the Doctor saves Clara via a leaf & some words that might as well be anything they're so meaningless. "You're my Impossible Girl" could have been "Izzy Whizzy Let's Get Busy" for all that it explains. But this time I found it less bothersome. I think because I deliberately decided to enjoy it and pretend it makes sense.

And then...ah...and the Doctor's true secret is revealed and that is a magnificent coup de theatre. Here is a new old Doctor. Played by an absolute legend in John Hurt. It's perhaps a measure of how far Doctor Who has come that an actor of Hurt's stature would accept the part. It must be one of the great cliff-hanger’s in the series history.

Whilst The Name of The Doctor is pretty good it really feels like the first part of a two part that will conclude with Day of the Doctor. It also ends the first arc of Clara's story. Tying up one of the strands of the Eleventh Doctor's era as we head towards the final two stories of Matt Smith's time in the TARDIS.

Basically, though I really enjoyed this partly because it has great bits in it: Gallifrey, old Doctors, the Doctor's tears, Clara's courage, The Paternoster Gang, The Whispermen's creepiness, the giant TARDIS, the Doctor's farewell to River and the John Hurt Doctor. It also has bits that annoy me in terms of lacking sense, but I choose to just ignore those and have fun instead. Perhaps I should do it more often.