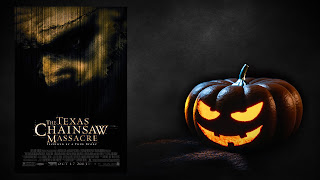 October can mean only one thing here at The DreamCage - it's time to count the days til Hallowe'en with David Ames' Hallow-vent Calendar of horror films! Day 21 is the 2003 remake of The Texas Chainsaw Massacre ...


Read the review of the original Texas Chainsaw Massacre here.

When we talk about the most classic horror movies of all time, the films that changed the genre and the public psyche all at once, there are few movies which come to mind: Psycho, Halloween, The Blair Witch Project, etc. All of these movies inspired new genres and garnered both critical and public success. Another film that falls into this category is Tobe Hooper’s 1974 cult classic The Texas Chainsaw Massacre, which presented audiences with things never before a part of the cinema experience. Today we are going to talk about the remake of that film, Marcus Nispel’s 2003 film The Texas Chainsaw Massacre.

Set in 1973, this film follows Erin, her boyfriend Kemper, and their friends Morgan, Andy, and Pepper, as they make their way across an incredibly rural south en route to a Lynyrd Skynyrd concert. Being genuinely full of compassion and kindness, the group pass a hitchhiker, a dishevelled and horrified looking girl rambling about a bad man. When the group is distracted, she removes a gun from between her legs and shoots herself in the head. Obviously disturbed, the group pulls over at a diner and calls the police. They are directed to a mill where the sheriff should be waiting, but instead they come across Jedidiah who mocks the sheriff, calling him a drunk, and telling the group where to find him. ‘

Kemper and Erin go through the woods to find his house but stumble across an old plantation instead. An amputee lets Erin inside but after she is gone for too long, Kemper steps inside to find her and instead comes face to face with Leatherface, who proceeds to murder him with a sledgehammer. Erin makes her way back to the van but when Kemper is missing for far too long, she and Andy go back to the plantation in hopes of finding him. Leatherface appears and takes off Andy’s leg with a chainsaw while Erin flees into the woods. In a role reversal of the original, it is Andy who is impaled on the meat hook.

I don’t want to give too much away but the creep factor is multiplied when we find out about the sheriff’s ties to Leatherface, and when we meet the disgusting woman living in the trailer. The twists in this film not only follow the original well but also add elements which only intensify the dread and unease.

This film is executed perfectly. It is shot incredibly well and they maintain the tie to the 70s in such a way as to not seem forced. The violence is perfectly on par with the original but the gore factor is ratcheted up to adhere to more modern standards. One of the most painful scenes in the film is after Andy is hung from the meathook. Leatherface takes a handful of course salt and forces it onto the amputated knee. The look of that alone caused me to cringe and look away. Also, on a much more twisted note, instead of Leatherface wearing some random woman’s face as a mask, the decision to have him sever Kemper’s face and where that while hunting Erin was genius. It is not only creepy, it is downright terrifying for both Erin and the watcher of the film.

The performances were all pretty solid. Andy, played by Mike Vogel, and Pepper, played by Erica Leerhsen, were perfect in their roles. They are stock characters in a slasher film and die accordingly, but their performances were rather convincing and they come across as people as opposed to two-dimensional archetypes. Eric Balfour shows up as Kemper and is smooth and sensitive, making the audience genuinely like the character, causing an even more intense reaction when we see his face being worn by someone else.

The two main stars of the “good guys” in the film were Jessica Biel as Erin, and Jonathan Tucker as Morgan. Biel is great as a final girl, ratcheting up the sex appeal but keeping a tight hold of the girl-next-door image so as not to sully the strength of the role in the film. She is smart but sympathetic and provides more of a threat to Leatherface and his family than Marilyn Burns in the original. Tucker is great as he always is, especially in the emotional scenes. When the sheriff has him repeatedly put the gun into his mouth, Tucker’s delivery is perfection. He is resourceful and strong but ultimately not the foil that the antagonist needs. Even his death is one of the more badass in the film.

In looking to the antagonists, there are two which draw close attention. Firstly, R. Lee Ermy is the best possible choice for Sheriff Hoyt. His delivery, as always, is spot on, and the mere raising of his voice calls to mind his other performances. He exudes what is needed to make the sheriff seem like just as much of a threat as Leatherface. His authoritative tone and demeanor were what was lacking from the similar role in the original. Lastly, Andrew Bryniarski shows real promise as the hulking Leatherface. Unlike the original, who was tall and big, Bryniarski is a damn mountain of a man and his presence is ultimately as intimidating as his actions. He is also very swift considering the size, and his attacks are precise and brutal.

There have been a multitude of sequels and remakes associated with The Texas Chainsaw Massacre but to be honest, the original and this remake are the only two that really succeed. The other films before they finally remade it have wonderful elements but everything after the 2003 release comes across as a cash grab and lack the spirit of this film. If you haven’t had the chance or were too scared to take the chance, do so and thank me later. This film isn’t just a good horror movie, it’s a genuinely well-executed movie, period.