Ahead of the new season of Arrow starting, Kraig Taylor-Bryant has been looking back at some of the older seasons of the show. Here's his thoughts from Season 2...


Now this is a season that I was excited to re-watch. This season of Arrow was by far my favourite, sure they might revisit a few things, such as the themes of family secrecy that season 1 gave us, but this time it was explored in a whole new way, with its incredible plot twists involving family, and how Slade Wilson, AKA, Deathstroke, ties into all of this. Not only does it do this, but it almost wraps up the theme, so that the story of the Green Arrow can progress in a new way, as it explores somewhat unfamiliar ground in season 3.

From the start of season 2, there seems to be some tension between Oliver and his close friend Laurel, as well as with Thea and her mother. It seems that we revisit the secrets and the betrayals that were revealed towards the end of season 1, with Laurel and Oliver betraying Tommy Merlin as Oliver had only just convinced his friend (Tommy) to get back together with Laurel, before going and sleeping with Laurel anyway, not long before Tommy is killed in his father’s “undertaking”. Further betrayal is clear within the Queen family, as they reintroduce Thea, who is dealing with her mother’s betrayal after learning she was involved in this undertaking that threatened her boyfriend’s home, so from the start we’re reintroduced to the family issues, to refamiliarize us in a way. Of course, it would only seem right to start the season off this way, but for the story to progress, they needed to reconcile before tearing the families apart a little more permanently.

But this doesn’t mean that there aren’t issues along the way, with Sara being added back into the mix, stirring things up and making her family wonder where she’s been this whole time, and a good chunk of the story seems to be about Sara being alive and how she survived the Queen’s Gambit sinking. This is at the same time as bringing back Shado and Slade through Oliver’s island flashbacks, and because of how they more intimately interact, and the actions that take, it almost makes us see them as more of a family, maybe a messed up family because Slade and Shado seem to be the most grown up, and yet Shado is involved with Oliver, but a family nevertheless.

And that’s when this flashback story takes a dark turn, when this older family of Oliver’s, in the flashbacks, almost gets cursed, when a deranged scientist named Ivo, obsessed with exploring the possibilities of a dangerous drug known as the Mirakuru, comes along and sets up Deathstroke’s birth, by killing Shado, the one that Slade actually loved, but never had the courage to tell her. However, it was the Mirakuru that slowly brought Deathstroke to life, after finding out that Oliver chose for Ivo to not kill Sara, Laurel’s sister, over Shado, thereby adding this sense of betrayal within a family, and causing Slade to intend unimaginable pain on Oliver and his family. 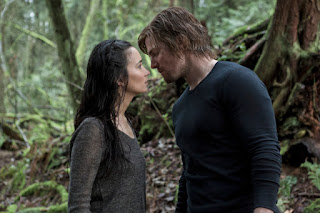 So, the story seems to progress fairly gradually, whilst also dealing with the issues of its previous season. Oliver is hiding on the island, after dealing with the loss of his best friend Tommy. And the fact that Oliver’s character changes almost entirely following Tommy’s death, serves as a constant reminder of him, and makes him an important character as a dead one just as much as an alive one. This would be because Oliver felt horrible about how he left things with his friends and feels as if he was too selfish to talk to Tommy and reconcile as friends, instead watching Tommy die knowing that Oliver was a monster and a murderer because of those he’s killed. And that seems to be the goal of this season, to have Oliver face an impossible enemy, whilst battling with himself, to honour his friend. We also get to see the Season 1 Oliver through the flashbacks, when, as the Hood, he makes the decisions to try and kill Slade but, because of this Mirakuru, he survives and comes to Oliver’s home, with the goal of ruining Oliver’s life, and eventually, ending it. Towards the end of the season, we see Oliver truly take on the name of the Arrow, and consciously choose to cure and imprison Slade, honouring his friend’s memory be leaving a man alive who killed his mother, leaving us as an audience realising that the best way to prove your inner strength is to do the hardest thing, and that is, to let things go.

I think that idea of letting things go is almost mirrored through Slade Wilson, as he’s a character that is on this journey of vengeance from around the middle of the season, because he can’t let go of the death of Shado, and he almost believes that hurting anyone at fault is going to make himself feel better. But ultimately, it leads him to make a reckless mistake, one that helps Oliver to defeat Slade and imprison him in a place that he cannot hurt anyone else. And that also shows that Oliver isn’t letting the darkness inside him consume him, which will serve him in the later seasons, as Oliver progresses around season 5, and we see how Oliver has really changed, but doesn’t realise it until it’s pointed out to him.

There are characters in this season that shine. However, one of the few issues I did have with it was that there were still a fair number of characters that didn’t really have the spotlight, or importance that they should have had. One of the things that I notice in particular after re-watching it, was Diggle. There was maybe 1 or 2 episodes where the plot revolved around him, but even so, it still seemed to involve Oliver saving the day a little too heavily, considering those stories were meant to be Diggle’s episodes. And in the other episodes, before he officially becomes a hero, like Oliver, he really just seems to be either the driver of Oliver Queen and maybe the guy to carry intel to Oliver, which didn’t feel important enough, considering how much we’ve grown to like John, throughout season 1. I believe that maybe he should have been made to be more important, and maybe made an appearance in the tunnel fight towards the end of the season.

Another character that I think, maybe should have had a little more screen time, was Oliver’s Co-CEO of Queen Consolidated, Isabel Roschev, since her character seems to become instrumental in Slade’s plan to take over Starling City, and it’s this betrayal that to me, felt the most clever, especially after finding out as much as we did as to why she has the vendetta against Oliver. I think that maybe seeing Oliver do a bit of work on the company with her, would have helped to make the betrayal more surprising and a little more impactful.

On the other hand though, Moira Queen, Oliver and Thea’s mother, developed a lot throughout this season, being a character that withheld so much from her children to the point when Oliver couldn’t even see her as a mother any more and, after nearly losing her daughter, she realises how much she loves her children, and makes the decision to stop keeping secrets and that keeping them together is far more important. And the best way to close off her story was to send this message in a way that told the audience that you shouldn’t keep these secrets, and you should be honest with your children, before it pushes them away or before you lose the chance.

The end fight of the season though was indeed a moment of nostalgia because, after the build- up of seeing a mother choose being with her family over their own home and career, and then having her die, it definitely built up the stakes. And what I loved most about this moment, was seeing Roy in the fight. Seeing him develop throughout the season and being able to relate to him when I watched this season when I was younger, since he, like me, was fairly young at the time, and seeing him in this final fight, just made his build up in character worth it. It was this season that made me like Roy a lot more as a character, which almost made me wish that the show could have ended here, because him leaving the show after such a character arc, just felt like a waste of a good character, and a great Team Arrow.

Overall though, I think that the plot went in a lot of different directions with this season, whilst exploring Oliver’s past coinciding with his current life, and that’s what made the flashbacks feel linked, and therefore more important. So I think this season is my favourite of all, both because of the themes that it closes off and the characters that it develops well, which are done brilliantly to the point where it’s just sad to see them leave the show when they do. This is something I didn’t feel as much when it came to Tommy Merlin, because there wasn’t too much of a backstory or focus on him that made his death more prominent until this season, which uses his death to make him the most important character, to explore how people should cope with loss, instead of Slade’s more negative example of coping with loss.