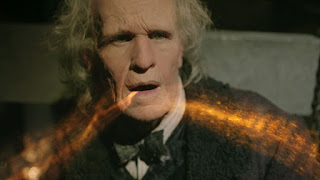 Our Doctor Who expert, Tony Cross, is journeying through all of time and space to bring us his thoughts on every available Doctor Episode. Today is the Eleventh Doctor adventure The Time of the Doctor...

So, I've finally reached the end. The moment has been prepared for, which will mainly involve going back to the beginning again. But more on that later.

The problem is that The Moff throws everything into this story including a kitchen sink and a turkey. We find out who blew up the TARDIS, what the Silence were up to and our friendly neighbourhood crack in the Universe pops up for a final bow. It turns out that the crack is now Gallifrey calling. They're asking the question that we have been pinging backwards and forwards for a while now and that seems to be a Moff fascination: Doctor Who? Pfft.

Then there's the usual 'every villain in Doctor Who history' is hovering above a planet. There's Cybermen who are being as rubbish as usual even though the wooden one is quite cool - if pointless. There's a couple of comedy Sontarans, which reminds me once more that The Moff has forgotten that Sontarans aren't supposed to be jokes. There's throwaway mentions of other species. And then there's the Daleks. Again.

Fundamentally the problem with this episode is that it isn't a proper farewell to Matt Smith more a Moff greatest hits. In a way it does Matt Smith a disservice. There's a few moments that shine: the scenes with Barnable (Jack Hollington), the end of Handles, the final reunion with Clara and the moments before the regeneration. The moment he drops the bow tie did genuinely bring a tear to my eye. But perhaps I'm going soft in my old age.

There's too much going on. Take a deep breath Mr. Moff and drop a couple of tricks. Do we need to throw another feisty mysterious psychotic female into the Whoniverse? This is Tasha Lem* (Orla Brady) who is apparently head of the papal mainframe. Now Orla Brady does a great job with the part and the 'I died screaming your name' moment is genuinely dark. But these kinds of women are becoming a Moff cliché. I suppose River Song wasn't available. And I say that as someone who likes River Song.

It's not meant to be about the writer showing off his clichés and tricks this stuff it's supposed to be a farewell to Matt Smith and it just doesn't work for me. The first time I watched it I got quite annoyed about the whole thing because it doesn't do Matt Smith justice. This time round I was less annoyed just because I let it flow over me. I tutted at certain points. The naked stuff still doesn't work for me. It's gratuitously silly as opposed to gloriously silly - which is how I describe Season 17 btw.

I've no complaints about any of the performances. Jenna Coleman does a wonderful job, especially as she must spend a lot of this story being sad. Can we have a bit of happy Clara in the new series please, although I'm not going to hold my breath. Matt Smith does what he's done throughout his time in the series and that's raise the quality of a story through his brilliance. So, whatever my rants about this episode are I'll never forget when the Doctor was him. *Sniff*

And yes, I am excited.