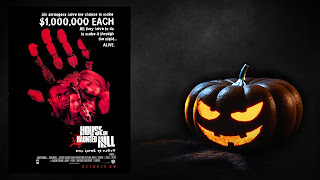 October can mean only one thing here at The DreamCage - it's time to count the days til Hallowe'en with David Ames' Hallow-vent Calendar of horror films! Day 22 is the 1999 remake of House on Haunted Hill  ...


Read the review of the original House on Haunted Hill here.

Have you ever watched something that so heavily resembled the time it was created that it is hard to see it in a different light? This week’s movie has that quality. Having been written and filmed in the late 90s, the movie bleeds that aesthetic, and if you are not at least acquainted with that era you may be caught off guard and put off on the whole production. Luckily for me, I was the ripe old age of 15 when today’s film came out so I can appreciate all of its rather cringy 90s appeal. Today, we talk about William Malone’s 1999 The House on Haunted Hill remake.

The film begins with a faux documentary piece detailing the events that transpired during a 1931 inmate takeover of the Vannacutt Institute for the Criminally Insane. The lead doctor, Richard Vannacutt, and his associates had been performing brutal and outrageous experiments on the patients before the revolt and when all seemed lost, the doctor put the building into lockdown mode, sealing the patients and the doctors behind inches of reinforced steel plates before igniting the inside and burning everyone alive.

Fast forward to 1999 where a man named Steven Price is a world famous creator of scares and amusements, sort of a cross between Wes Craven, Alfred Hitchcock, and Walt Disney. The film opens with a few reporters interviewing him about his new theme park and we get to bask in Price’s charisma and mentality before the film truly begins. In the middle of watching the success of a ride he has created, his rich wife Evelyn calls and tells him that she wants to have her birthday party at the newly restored Vanncutt Institute. Immediately we see the tension in the relationship. They are not happily married so when she sends over her guest list, Price deletes it and invites an entirely different group of people. As he walks away from his computer, the names are mysteriously deleted and a small number are then written.

The night of the party comes and the guests all arrive in limos, greeted by the owner of the house, Pritchett, who informs them that they must walk the rest of the way. He is erratic and hyper and none of the other guests know what to think exactly. The guests are Jennifer Jenzen, Eddie Baker, Melissa Margaret Marr, and Dr. Donald Blackburn. They enter the house and are greeted by Evelyn when suddenly the stained glass on the ceiling shatters and almost impales Evelyn. Convinced that Steven is messing with her, she is not scared but is instead angry that he changed the guest list. Steven claims his innocence but laughs off the situation. We find out later that Steven also has his right-hand man from the theme park working some shenanigans backstage in the house.

Price informs the group that if they survive the night, they will each take home a million dollars, but Pritchett, acting even more erratic and downright terrified asks for the money he is owed so he can leave. When questioned about the mysterious deaths which have occurred in his family, supposedly because of the house, he laughs it off and says none of it is true. Suddenly, the house goes into lockdown mode and after it is apparent that no one can leave, Pritchett tells the group that the house is alive and now they are all going to die.

That is all the plot summary I want to give because, much like the original, the film doubles as a mystery as well as a horror film. The twists and turns are surprising and fun and make the film feel like a rollercoaster. You are never sure exactly what is happening and who is telling the truth. You are also never really sure if everyone is who they say they are.

Performance wise, all of the players are decent. Bridgette Wilson (Melissa) and Peter Gallagher (Donald) are serviceable in their roles and provide just the right amount of fear and suspense. Next is Famke Janssen who plays Evelyn in a deliciously salacious and calculating manner. Not only is she sexy, she is also somewhat intimidating as you get the sense that her character will do anything to achieve her goals. Chris Kattan is hilarious and even a little sympathetic as the fear-stricken Pritchett. He provides levity to a film that is pretty bleak.

Ali Larter and Taye Diggs, Jennifer and Eddie respectively, are both strong and independent with secrets to hide. They help to carry the film to its conclusion and do so convincingly enough. Honestly, the best performance by far is that of Geoffrey Rush playing Steven Price. He is incredible in this role, ruthless, conniving, and borderline evil, but still so much Charisma that you find yourself pulling for him almost more than anyone else. He is the best possible homage to the famous Vincent Price and does that original role real justice.

The film is shot in that late 90s style. There is a lot of that “creepy things are fast forwarded and twitchy” while the rest of the world is normal and it helps to add to the creep factor of the film. The handheld work with the camera is also reminiscent of the time period. The CGI is horrendous by today’s standards but it just adds to the charm of the film. Honestly, if you locked this film, Dracula 2000, and 13 Ghosts in a room, it would appear that they were all filmed by the same crew. I am totally fine with it though.

I loved this film. It might be pure nostalgia as I watched it a ton when I was younger, but honestly it is just a truly fun film. It is not going to win any contests for best film ever but if you want a somewhat creepy movie with a decent premise and good performances, you can never go wrong with this remake. Hell, Rush’s performance alone is enough to warrant a viewing.