Documentary - After the Screaming Stops 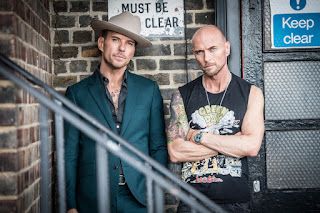 Screening again today and on Saturday at London Film Festival, our very own Brosette,  Steve Taylor-Bryant, watched After the Screaming Stops...

In the 1980s, “Bros" were one of the biggest bands in the world... for 15 minutes. Having sold out stadiums around the world, they were the youngest to this day to play Wembley and their “Push” album went to Number 1 in over 20 countries, selling 10 million copies worldwide. The rise and fall of Bros was meteoric. This film charts twins Matt and Luke Goss's reunion 28 years on, having hardly spoken and not played together since their split. With an incredibly fractured relationship and only 3 weeks to go until sell-out gigs at The O2 London, will they be able to put their history aside and come together as brothers to play the show of their lives? A raw and emotional look into the aftermath of fame and the reconnection between two twins torn apart by their past.

I wasn’t sure what to expect from a documentary about Bros. I am not embarrassed to say I was a fan of the band way back in the distant memory of my youth but hadn’t seen or heard from Matt Goss for about thirty years. I am however a fan of Luke Goss as an actor so I was a lot more familiar with his life since the band broke up, or at least I thought I was but After the Screaming Stops, a title based on a question Terry Wogan once asked the brothers, opened my eyes up to so much that both the Goss boys had been through and all the pressures that were arriving with their comeback gig at London’s O2 arena some twenty eight years after they last graced a stage together.

Having been in a band for most of life, albeit never successful, I can appreciate how much work and arranging any gig takes. The rehearsal time, the fractious nature of being locked in a room with guys for ten or fifteen hours a day until something is right, the pressure to nail every beat is quite immense at the level I played at and so to see how amplified it was at the top end of the spectrum was strangely cathartic for me, it was nice I suppose to see that even the biggest stars struggle to pull off a performance the audience thinks was flawless. I have also had opportunity in my past to reconnect with a band after many years of not playing together after a split and I can tell you from first hand experience its not a situation you want to go into, the animosity and years of distrust and often complete hatred for one another makes for a thankless task. In After the Screaming Stops you get to see all those emotions and situations play out but with the added emotion of family, these boys are twin brothers and that’s an element I wouldn’t wish on any act. It does lend itself however to the making of great documentary as After the Screaming Stops is not just a film about a broken-up band coming together to a comeback show, it is deep and personal search through the history of family. 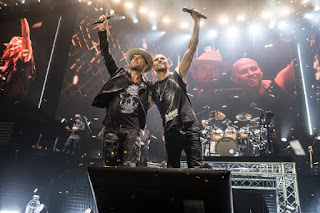 As fans of musicians we see them on our televisions, collecting their numerous awards and we think ‘lucky gits’ or thoughts along those lines. However, we never know what the guys onstage are going through, what is driving their minds behind the smiles. To see a clip from Wogan that I remember clearly of the band finishing their performance and receiving platinum discs, all smiles and happiness, but to now find out this was hours after their sister was tragically killed in a car accident is not only emotionally hard to watch, it has really opened my eyes up to the fact that these guys and girls we worship in our daily lives are human beings. We forget that these icons we see on our screens or hear through our radios have everyday problems, have souls, and family and feelings. It's just that they are cogs in a machine we don’t see that has to keep functioning and so it is no surprise to see Luke especially sat with nearly three decades of resentment towards the press, and repressed feelings of failure, and to see how broken the relationship is between the brothers. It was sad to see, it was uncomfortable to watch, and on more than one occasion I felt a sorrow I have never felt for celebrity before. The tension was palpable and the closer the band got towards the gig the more as a viewer I was wondering what the point was, they were obviously nowhere near ready to play together at a huge venue, let alone be in the same room together. To see that journey from barely speaking to complete brotherly love happen in front of my eyes was an emotional rollercoaster and one that has led me to have so much more respect for Matt and Luke Goss.

Covered in After the Screaming Stops is the worldwide fame, the money disappearing (Luke had to ask his fiancée to return her engagement ring so they would have money to survive), Luke’s anger at the press, management, his brother, life in general, and also how each brother has forged ahead in their own chosen careers since they were last a famous pop group on our television sets. I knew Luke to be a great actor with a lot of fans within the industry, Guillermo del Toro loves him, and Ron Perlman is briefly in the film near the beginning telling of his admiration for Luke, and how Matt forged ahead with a song writing and singing career that led to a Las Vegas residency. From where the boys are now, they fly to the UK to prepare for the O2 comeback and take in old homes, tell stories of their childhood, and you get a real sense of normalcy from two boys that have very little, if any, ego. Two brothers who adored their mother and are still mourning her loss. Two London brothers with childlike stories of playful accidents, of crap band names, that just happened to become a global phenomenon that both helped and hindered their lives and their relationship with each other.

After the Screaming Stops is a fantastic in-depth look into a life that many of us have wished we could have lived and shows why maybe we were lucky to escape. Bros as it turns out were so much more than just a boyband. Prepare to respect them.